A few weeks ago, Patrick and I went to Hipperholme in Halifax.  Why would anyone do that you ask?  Well it was specifically to visit The Cock O’ The North pub which is the tap of the Halifax Steam Brewing Company.  We had had the place recommended to us by a couple of guys in our local pub The Wellington Inn (which doesn’t appear to have it’s own website any longer).
So, The Cock o’ the North then.  At first glance from the outside, we wouldn’t have ventured in here.  It is built of portakabins and doesn’t look like the greatest place to spend a Friday night.  I am so, so glad we had the recommendation though (thanks to Blakey and Paul) because inside, it was like a temple for real ale fans.  The long polished granite bar (which the bar staff kept scrupulously clean all night) has a beautiful backdrop of two huge fish tanks.  I only had my phone to take pictures  but please follow the link above and have a look at their own picture gallery to see what I mean (although the fish tanks did have fish in them when we were there).  Plenty of table and chair seating around the room and nice comfy wooden bar seats so we could contemplate our next beer choice and watch the fish at the same time.  Ten real ale pumps spanned the bar, all boasting brews by Halifax Steam Brewing.  We decided to work our way along, both of us sampling a different drink each time so to give us maximum tasting treats!  We did get to the end and start on our way back down again actually ;-).  My particular favourite was The Dark Side, an absolutely scrumptious dark beer tasting of chocolate and coffee.  The Cock O’ the North beer was also very lovely with caramel notes.  The two that seem to be their regulars, are Aussie Kiss, a very pale and hoppy brew and at something like 3.8% a real session beer and Uncle Jon a dark but mild flavoured beer which at 4.3% is also very drinkable!  The other beers I believe rotate as and when.  I do tend to prefer dark beers but having said that, the paler, blonder ones on offer were also very nice.  There wasn’t one beer on offer that I would say that I wouldn’t drink again.  Quite an achievement with ten different ones!
The manager/owner (didn’t quite work out which) was a lovely guy who spent a bit of time chatting to us and when he found out where we were from and our local, was delighted to be able to tell us that he knew of the Wellington guys from their previous visits and was full of praise for our fair city of Hull as well.  All in all The Cock O’ the North is a highly recommended visit for all you real ale fans out there, heck there is even a camp site out the back if you are mad enough!
We had a good weekend all round really.  We had arrived on the Friday afternoon to stay in the Premier Inn at Halifax.  What a lovely location it was in, right on the canal side and the rooms had their own outside front door, kind of like American motels that you see on TV sometimes, but nicer.  The only drawback was that although it was only 3 or 4 miles away from Hipperholme, the taxis both ways cost just shy of a tenner!  So a bit of false economy with the cheap place to stay really but as it was so nice, we’ll forget that little annoyance.  This picture was taken just outside our front door. 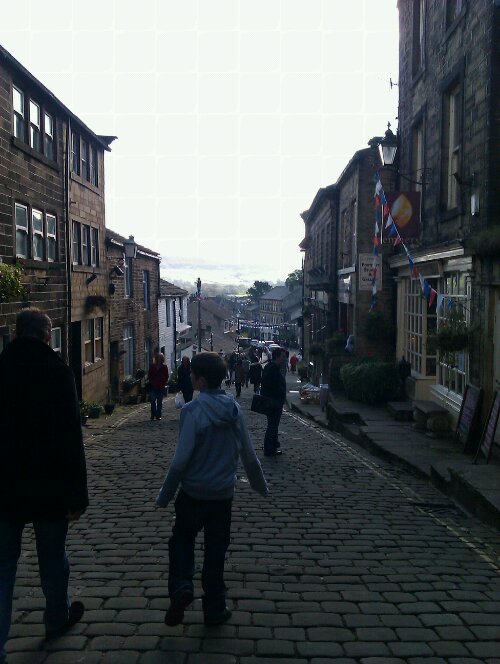 On the Saturday, after a hearty breakfast/lunch at the Wetherspoons I had spotted in Halifax town centre the previous night on our way to Hipperholme in the taxi, we decided we would drive home the scenic route rather than the rather dull M62.  I wanted to go to Haworth for a wander up the High Street, I haven’t been for some years and Patrick had never been before.  The weather was so beautiful, one of those gorgeous Autumn days that are sunny and calm, yet really quite chilly.  This is my favourite time of year and weather, as I may have mentioned before, I’m not a sun worshipper in the least.  We enjoyed a meander up and down the High Street, walked through the church yard and I popped into the church hall to have a look at the local craft fair, I was a little sad that I had eaten such a large breakfast because there were some seriously delicious looking homemade cakes.  I was temped to buy a piece for later but it would have ended up all squashed before I got home knowing me.  We then stopped for a cuppa in one of the many tearooms along this delightful, cobbled (and very steep) street and I couldn’t help noticing that there was a poster in the window for their Knit and Knatter group, how very fab to have a knitting group in such a lovely location.  I decided I want to live in Haworth, just so I can go to the Knit and Knatter. Please excuse my awful photo of Haworth’s High Street.  It didn’t turn out so well with my phone but I’m sure you can find much nicer ones on the web if you are so inclined.

After a pleasant couple of hours in Haworth, we set off for home, deciding to take the A59 route over the top and through York.  It is a much longer drive but Patrick agreed, better than the boring old motorway.
We stopped for a break in Knaresborough to stretch our legs, visited the beer shop there for a little supply of Belgian bottled beers and had a walk around the castle.  I’m ashamed to admit that I didn’t even know there was a castle at Knaresborough but sure enough, there is and with stunning views to boot.
I am quite pleased with this phone photo.  The stunning viaduct over the River Nidd as photographed with my little HTC phone from the walls of Knaresborough Castle.  We had a little wander around Knaresborough town centre and I now decided that I want to live in Knaresborough as it is so pretty :-).  It was turning a bit nippy by now and we were flagging a bit after our day of sightseeing so we started off for home, having thoroughly enjoyed our West/North Yorkshire weekend break.