In years gone by, Humber Street, being adjacent to the Humber Dock was home to the Fruit Market where all the fruit and vegetables would be unloaded from ships into the warehouses of the fruit merchants and the greengrocers would go there to buy their wares.

Over the past 6 or 7 years, some of the creative folk of Hull have been migrating towards the area, leading to an organic growth.  One of the first was the Oresome Gallery which offers bespoke jewellery pieces and regular classes to make your own piece.  Our annual Freedom Festival became centred around Humber Street, the Marina and the Pier.  Then came Humber Street Sesh in 2011.  I remember the organiser appealing on social media for individuals and businesses to help out financially to get this off the ground. The first year was fairly small scale but like Freedom Fest, it has grown year on year and is now one of the most sought after tickets in town.  Thieving Harry’s started up just as a pop up cafe in an open front warehouse during events and at the monthly Humber Street Market.  There is a Micro Brewery, Yorkshire Brewing Company which as well as it’s core range, brews a few themed beers for events such as the Hull & EY CAMRA beer festival and Freedom Festival. The world’s only Museum of Club Culture started by Mark Wigan in a unit on Humber Street, however the shop they occupied is to be demolished for a residential development so I don’t know what the future holds for that venture.  Dinostar is an interactive dinosaur museum and fossil shop and popular with families.The fruit market, such as it is, has been relocated out along the A63/M62 now that transport methods have changed from ships, barges and railways to lorries and motorways. For many years Humber Street was home to nothing but derelict buildings.

It must have been fairly easy to build on this already thriving cultural community for Hull City Council but to give them their due, they have invested a lot of money in refurbishing the roads and the warehouses whilst still retaining some of the feel of the old Humber Street.  The cobbled road has been repaired and is complemented by the brand new granite blocked pavements.

Two newly opened restaurants appeal to trendy diners, Butler Whites and Ambiente and a local chocolatier who started up and still has a stall in the covered market as well as a soon to be opened Gin bar called Humber Street Distillery will appeal to the masses.  There are now several galleries, although we seem to have lost one of the old ones that I can remember visiting a few years ago. 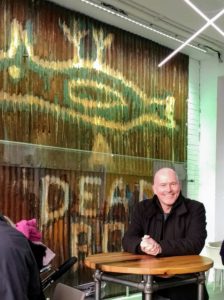 The day of our visit saw us in the then newly opened Humber Street Gallery, primarily to see Dead Bod now hanging in the cafe bar area of the gallery.

Whilst there, we popped into the exhibit in Gallery 1.  Power in Woman by Sarah Lucas.  For me, this was pretentious art bollocks at its finest!  Basically it was plaster casts of literally topless women, as in their lower halves only, with cigarettes protruding from their orifices.  Quite distasteful really and no matter how many people try to ‘explain’ it, I just don’t get it.  I would have gone upstairs to the other galleries to see the apparently even more explicit exhibit of Coum Transmissions but Patrick had had enough arty-farty stuff for one day so we went for a beer instead!