Here we are in March so I thought I’d better catch up with February before I forget it all.  It was quite a busy month events-wise with a couple of volunteer shifts and a fair few social shindigs.

I decided in January that having had a bit of time off, it was time to get back into some City of Culture volunteering.  So, on Saturday 3rd, I did an afternoon shift at the Brynmor Jones Library on the University of Hull campus at an exhibition called Painting Power – The Art of Terence Cuneo.  I intend posting more about that on my Hull2017 blog but here is some information about the artist.  I thoroughly enjoyed my shift with another lovely volunteer whose name I can’t recall and we spent most of the time searching for the little mice that the artist used to hide in his paintings.  He is most famous though for his painting of trains. 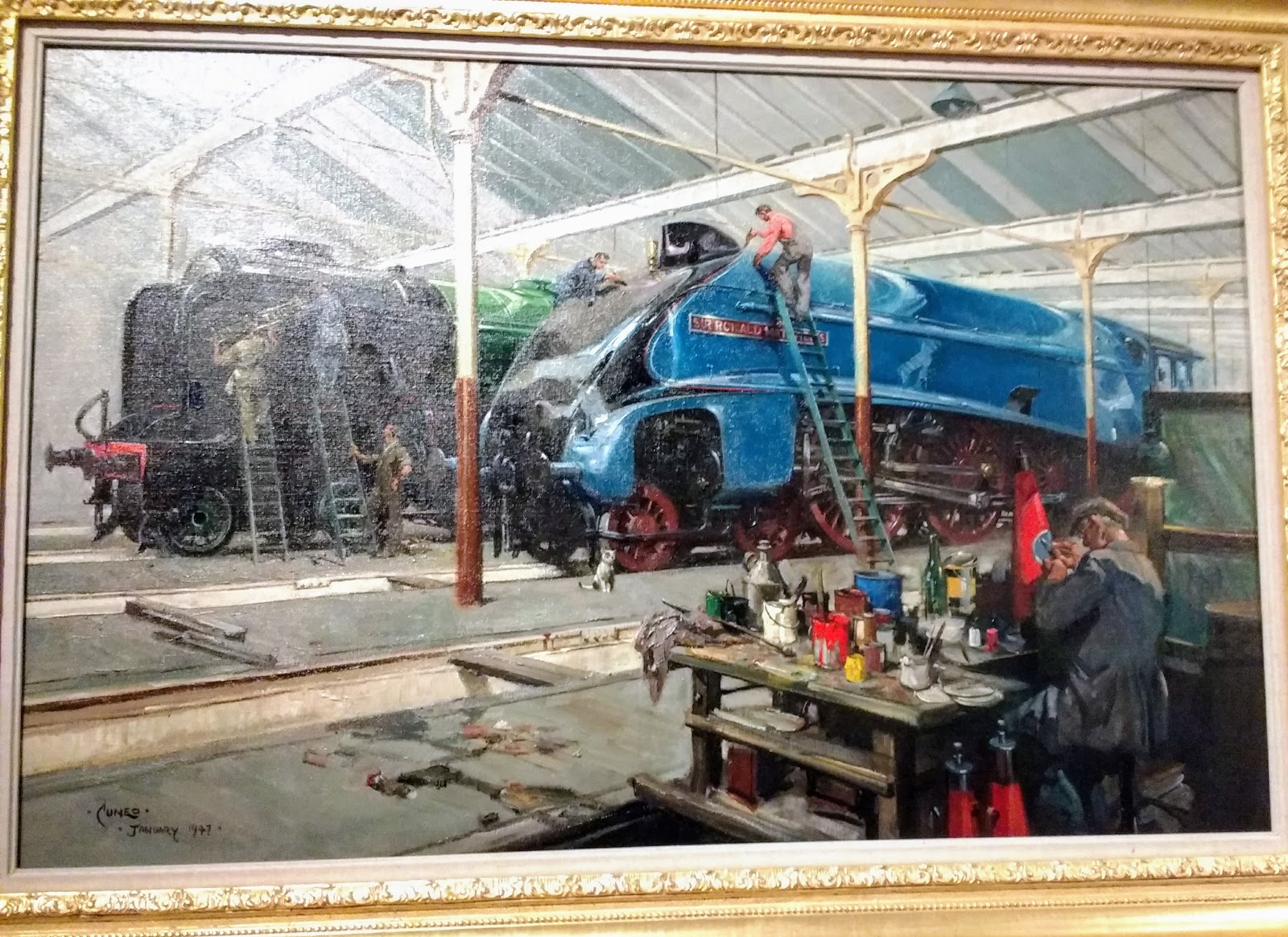 Whereas I am most famous for taking wonky photos!  So, to remedy that and the fact that I feel I am outgrowing my phone camera, I decided to go into Jessops the next day to look into buying a reasonable compact camera.  I wanted one that would do the Auto thing but also that had enough manual controls so that I could learn to take better photos.  After some advice, I ended up buying a Panasonic Lumix TZ60 and have enrolled on a course for beginners digital photography at Hull College which starts in April.  I actually enrolled on one starting 20th February but it was cancelled due to low numbers.  Hopefully the April one won’t suffer the same fate as I am really looking forward to learning how to use the camera before we go on our Scottish Highlands holiday in May.

The next weekend we were at the wedding of Patrick’s nephew Andrew and his fiancee Julie.  I took a few family snaps but was a bit too self conscious to go around snapping everyone.

Before that, on the Wednesday night, I went to Hull City Hall to see Erasure with my work colleague and good friend of 28 years, Debbie.  Debbie has been a fan of the band since the 1980s and has seen them too many times to count over the years.  It was my first time and although I enjoyed it, I’m not enough of a fan to be too fussed about seeing them again.  I’m pleased I’ve seen them though and they were excellent.

The next Wednesday, Patrick and I were at Hull Truck to see The Culture – A Farce in Two Acts.  I’m afraid this was a bit of a let-down for me.  I am aware of what a farce is but this was just too much door slamming, talking too fast and unbelievable mistaken identities to be funny, it was just silly and irritating.  The second half improved thankfully and we ended up rather enjoying it.

My next volunteer shift was The Feren’s on Sunday 18th, again more about it over the page but it was basically invigilating the Open Exhibition, which is an annual event showing the work of amateur and professional artists of all kinds.

Next up at Hull Truck (told you it was a busy month), was Turn and Face The Strange, a show about our very own Mick Ronson.  Former Spider from Mars (along with fellow Hullensian Trevor Bolder and Driffield lad Woody Woodmansey), Mick went on to work with many other musicians over his career.  The show originally ran at the Freedom Centre last year as part of Hull2017.  I am so pleased to have had the opportunity to see it again, truly one of the most enjoyable shows I have seen.  Part live band, part film archive all wrapped up with anecdotes from friends and family it is a feast of entertainment and I think all those present learned a lot about the vastly under-rated Mick Ronson.  This review from Yorkshire Post about covers it.

Finally to close off a very active February, my sister and two sister-in-laws and I went out for our monthly meal date.  My sister Ann and I started it off last year, meeting up sporadically as a means of keeping in touch with one another’s lives as since mum died, we don’t really see each other or even speak to each other very often.  Lynne and Chris joined us in November last year but then our arrangements were in danger of falling by the wayside again until Ann text me to suggest meeting on 26th February.  We went to Dukes on Princes Avenue, so named after the streets opposite which are all named after Dukeries, Welbeck, Thoresby, Clumber, Belvoir and Blenheim.  We had a good old natter, catching up with one another’s family news and some lovely food.  Between us we had the fish and chips, the baked haddock and a veggie burger.  All were really lovely and the chips were real, proper chips.  Highly recommended all round.

Phew!  Bit of a mammoth post there and I promise I’ll try to keep up with March with more regular posts.