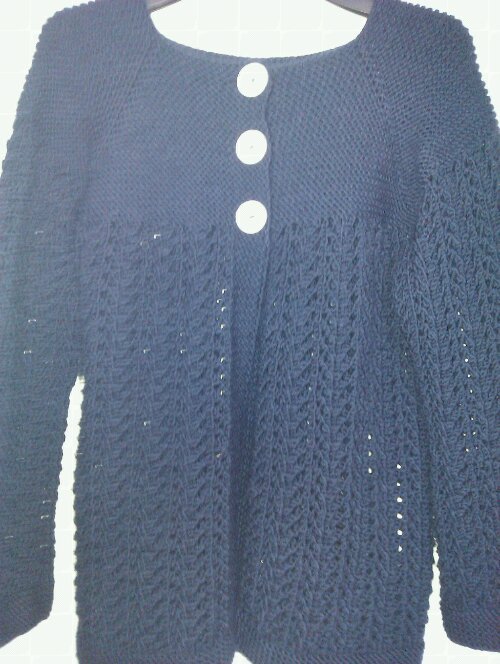 Well, I say FOs…there’s actually only one Finished Object which is the very lovely (if I do say so myself) February Lady Sweater as pictured above.  Please excuse the crappy photo (the white dots are light shining through the holes in the lace pattern I think), I will post a better one after the weekend hopefully but I am just so happy to have finished this never-ending project that I just had to share it.  Knitted in Debbie Bliss Rialto Aran in Navy blue, the yarn shows off the lace pattern really well and the stitch definition is really crisp and suits the garter stitch yoke very well.  I did enjoy knitting this but just got side-tracked so many times that it took much longer than it should have.  I’m sure I will wear it a lot, it is very comfy and cosy as well as looking quite stylish I think.

As for startitus, well I just haven’t been able to make up my mind what I want to do, so I’ve cast on for several projects and have been matching yarn to projects with no thought to how much time all of these things are actually going to take!  I had tried to continue with my Dreamy Ishbel, the Ishbel shawl in the gorgeously soft Dream Lace but I really am going to have to be in the right mood for that.  I don’t think Laceweight yarn is going to be my thing unfortunately, as beautiful as the results are, I’m not enjoying knitting with something that is as fine as sewing thread.  I know this will be a beautiful shawl someday but I’m just not in the mood for it right now.

So with that in mind, I started on no less than three different projects in one night!  A lacey keyhole scarf in some beautiful Louisa Harding Grace hand-dyed which was a raffle prize for Patrick’s sister Coral.  There is such a small amount of yarn, only 100m, that Coral said she had no idea what to do with it.  I have always wanted to try this particular yarn so said I would look for a pattern and knit it for her.  I think I may be able to do a small version of this scarf which will look pretty.  Other options were fingerless mitts or headbands and believe me, Coral is not a fingerless mitts or headband kind of girl!  Next up was a shawl in my grey Shetland 4ply, I chose Willow (Rav Link) by Vikki Harding because it looks to be a nice simple pattern.  I had a copy of the Yarn Forward magazine featuring the pattern so away I went.  The charts in the magazine are so small though that I was soon going cross-eyed with the effort of following them so I gave up on that (I have now enlarged the charts on a photocopy so can continue….at some point!).  Rightio, what to do next…..continue with the lacy scarf or one of my other WIPs?  Don’t be silly, startitus is a control freak and it made me cast on Ysolda’s Cloud Bolero (Rav link) in the Marble Chunky that I have in stash.  It was a tricky pattern to get my head around at first because there is lots of counting and stitch markers involved.  However once you get going it’s fine and amazingly fast!  I’m almost finished, in fact if it wasn’t that I’m doing it slightly longer than the pattern states, I’d have cast off by now.  I think it’s going to be very pretty and I’m sure I’ll be knitting more of these in different yarns.  I now have a use for the two skeins of Rowan Summer Tweed that I have in stash that I’ve been struggling to marry up to a project!

In other news, we went Elderflower gathering last week and have 3 gallons of Elderflower wine fermenting nicely in Patrick’s kitchen.  Along with the Dandelion and the Hawthorn Blossom we’ll be having a merry old time of it next summer 🙂 .  I think that’s us done with wine for now until the brambles ripen in August when we’ll be gathering enough for a nice lot of Blackberry wine (and bramble and apple pie of course).

2 Replies to “FOs and Startitus!”