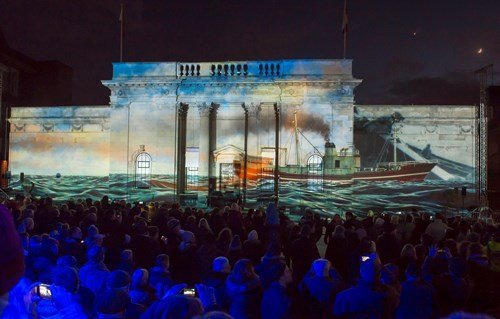 Talk about In With A Bang!!  Wow. We certainly started it off in style with a fantastic light show of Hull’s historic moments and events over the past 70 years or so.

On Sunday 1st January, New Years Day, Queen Victoria Square, Hull was the setting for a spectacular film and sound extravaganza shown across the facades of the beautiful buildings surrounding it.  The former town docks offices, now the Maritime Museum, The City Hall and Feren’s Art Gallery all became screens for the film to play out on a continuous loop every evening from 4pm to 9pm.  Images and sounds of events such as Amy Johnson’s solo flight to Australia in her gypsy moth Jason, the magic of Hull Fair,, the music of The Spiders from Mars, sporting heroes from our rugby and football clubs, such as Roger Millward, Clive Sullivan and Dean Windass with his legendary Wembley play-off final winner which sent the Tigers into the Premier League for the first time, as well as Luke Campbell, Olympic Boxing Gold Medallist in 2012 and Karen Briggs, former World and European Judo champion.  The depiction of the blitz of WW2 and a very moving segment in memory of the tragic loss of lives during the triple trawler tragedy of 1968 made a few eyes fill with tears.

I felt so proud standing there watching not only the show but the faces of the people around me, looks of wonder and awe on their faces and tears in their eyes.  As we finished watching it that first night, I remarked that although it was so busy, I expected that a lot of the spectators were also in town for the firework display which was to be later, down at the pier and I hoped it wouldn’t be empty for the rest of the week. How embarrassing would it be to have a light and sound show playing out each night to an empty Victoria Square?  How wrong could I have been and how proud and happy did it make me to be so.  The crowds swelled in number as the week went on and people were going back over and over again.  Civic pride in bucketloads and this is the reason for it.

Made in Hull Light Show

I mentioned fireworks earlier.  Well, this was a ticketed event due to safety reasons and crowd control, although the tickets were free.  Unfortunately, the morning they were released online, the City of Culture website became overloaded and just couldn’t handle the volume of traffic.  We were not lucky enough to get tickets at that time but luckily for us, Patrick’s sister Tina had two going spare and so offered them to us.  I nearly snapped off her hand!  So after the light show, we headed off to meet Tina and Andrew to collect our tickets and walk down to the pier together ready for the firework display which was to commence at the symbolic time of 20:17.  In the event, it was a few minutes late starting but I think you’ll agree, it was worth the wait.

In with a BANG!

There were several other fantastic art installations around the city centre for that first week.  I’ll tell you all about them in the next post.