I had thought about becoming a City of Culture volunteer last year when they first announced the volunteer program but I was worried that because I work full-time, I wouldn’t be able to do much to help.  After the first week’s events though, I decided that I really had to be involved with this once in a lifetime opportunity or I would regret it forever.

I looked into it a bit more and discovered that it is really flexible, you really do exactly how much you want to do.  You are offered shifts based on your interests and availability via an online portal and if you want to do it, you sign up, if you don’t then no problem. 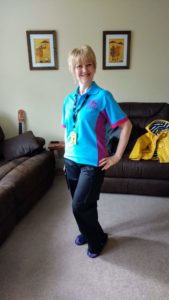 I went for an interview and to try on a uniform for sizings in early February and was notified about a week later that I had been accepted.  Two core training sessions followed which were really good fun.  Just a bit of information about how the volunteer program works and a section on local knowledge.  Uniform collected and I was ready and raring to go….’scuse the slippers!