On Wednesday this week Patrick and I went to Lincoln to see Bob Geldof play the Theatre Royal.  I have been a fan of Bob’s since the early days of the Boomtown Rats in 1977.  I clearly remember as a 15 year old watching this strutting, pouting vision of sex on legs (yes, he really was) belting out Looking After Number One on Top of the Pops and falling instantly in love with him and his music.  My opinion has not changed despite the fact that Sir Bob will be 60 on 5th October this year.

For those of you who only know Bob as the loud-mouthed political campaigner and co-founder of Band-Aid and Live Aid,  I have to inform you that the man has also been making music for 36 years now and in my opinion it is pretty darned good music!

He and his band, including Pete Briquette, one of the original Rats, are also phenomenal live performers, excellent musicians to a man they kept the Lincoln crowd entertained for around 2 hours.

We took our front row seats (and the stage literally was a foot away from my knees!) and enjoyed a lively support act, an acoustic duo who didn’t appear to have a collective name as they introduced themselves using their own names, which I cannot remember.  A young guy on a guitar and another singing.  A great voice, singing hits by Paul Weller, Richard Ashcroft and The Rolling Stones.  They left the stage and the crew started readying it for the main event.  This seemed to take forever and it’s always something I wonder about,  why have they not made all preparations earlier so that the main act can get straight on with things?  Anyhow, after what felt like hours of waiting (about 30 mins), the band entered the stage to enthusiastic applause.  I found myself a little breathless to be so close to Bob actually :blushes:.  I managed to take three or four photographs before being told by the theatre staff that I was not allowed to do so :-(.  A great shame because I could have got some much better pictures later on in the show. 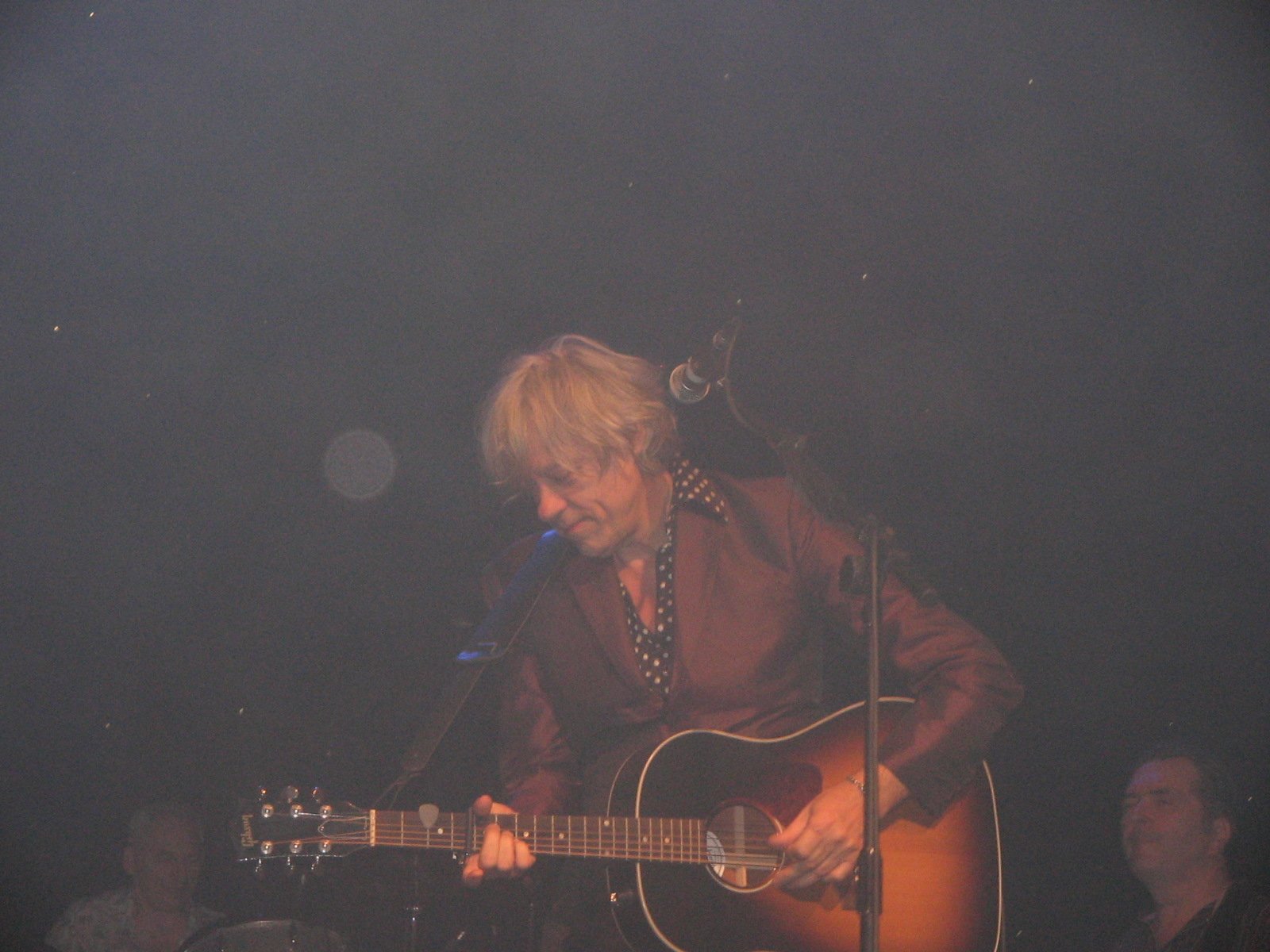 Opening up with Great Song of Indifference which is a lively Irish jig type tune to get the crowd in the mood, Bob then had his customary introductory chat in which he informed the good people of Lincoln that he had previously not known where the city was or even that they had a cathedral.  He said that Johnny Turnbull  Guitar and backing vocals,(previously of The Blockheads) who hails from South Shields had suggested it might be ‘somewhere near Hull’ which got a cheer from me of course.  They moved onto Sex Thing from the album The Happy Club, another lively track and then Systematic Six-Pack and Dazzled By You from the latest album How To Compose Popular Songs That Will Sell by Bob Geldof aged 58 and a half. Dazzled is most definitely my favourite song of the album and is a tribute to Bob’s partner of 15 years, french actress Jeanne Marine , the opening lines of “In abandoned empty rooms, lying naked in my ruin, I was dazzled by you” is just for starters, it’s simply a beautiful song about love.  A hark back to Rats days next with When the Night Comes from the album The Fine Art of Surfacing and then a tale was told of how the next song came to be.  Banana Republic was written by Bob and Pete Briquette following the band, on returning to Ireland in 1980 having achieved so much success in the UK, being banned from playing in their own country.  Bob was very scathing in his description of the corrupt regime ruling Ireland at that time and the song reflects that.  How I Roll from How to Compose was next followed by a cute little song called Harvest Moon, a bonus track on the album Sex Age and Death. I have to admit I didn’t particularly enjoy the next two songs very much, Scream in Vain is not my favourite song and performed live was a bit shouty and clashing instruments for my taste, as was One for Me, both from the Sex, Age and Death album (also not my favourite album coincidentally!).   A feast for Rats fans followed with Mondays, after which Bob announced that the audience ‘may as well go home now’.  To which I replied “not until you’ve done Love or Something”, a track I particularly enjoy as it’s very lively.  He didn’t oblige my request but was, I think, pleased that someone had requested a rather little know track instead of the more famous hits.  Joey’s on the Street Again, Rat Trap and Mary of the 4th Form concluded the main set, with the band demanding us to be on our feet and dancing by the time Rat Trap was underway.  Of course, we weren’t letting them off that lightly and the demanded (and prepared for) encore comprised of Silly Pretty Little Thing and Diamond Smiles.  The band left the stage to a standing ovation, rapturous applause and cheers all round and then the theatre staff opened the exit doors.  I commented to Patrick that this was unusual because the band always end with Great Song of Indifference, even if they have started the show with it too.  I felt there should be another encore to come and that the theatre staff had jumped the gun somewhat but the audience had started to shuffle towards the exits.  There was then an embarrassing period when the stage crew appeared to encourage us to demand another encore…..which we did of course and the band reappeared, laughing amongst themselves, to perform Here’s to You and finally, Indifference.  Of course we were all up and dancing, shouting and singing and personally I didn’t want the night to end….but it did strike me as a little ironic in an amusing way following the confusion over the final encore that the evening ended with The Great Song of Indifference!
A Bob Geldof live performance is great not only for the music but for the man himself.  He talks to his audience, explains song meanings, pokes fun at himself, has usually made an effort to learn something about the place he is in.  He is in my opinion, despite his brashness and outspokenness, a rather humble man.  He is aware that his records are never going to be best sellers – quote  “I mean, F***ing Hell, I’m almost up there challenging Adele!” Said whilst laughing ironically.  This all makes for a more intimate feel to his concerts and I’m sure I’m not the only person who feels that way.
I don’t have an excellent memory by the way and nor was I sad enough to go into the gig with a notebook.  I know the set order because the lovely Johnny Turnbull offered his copy of the set list as a souvenir and I grabbed it. 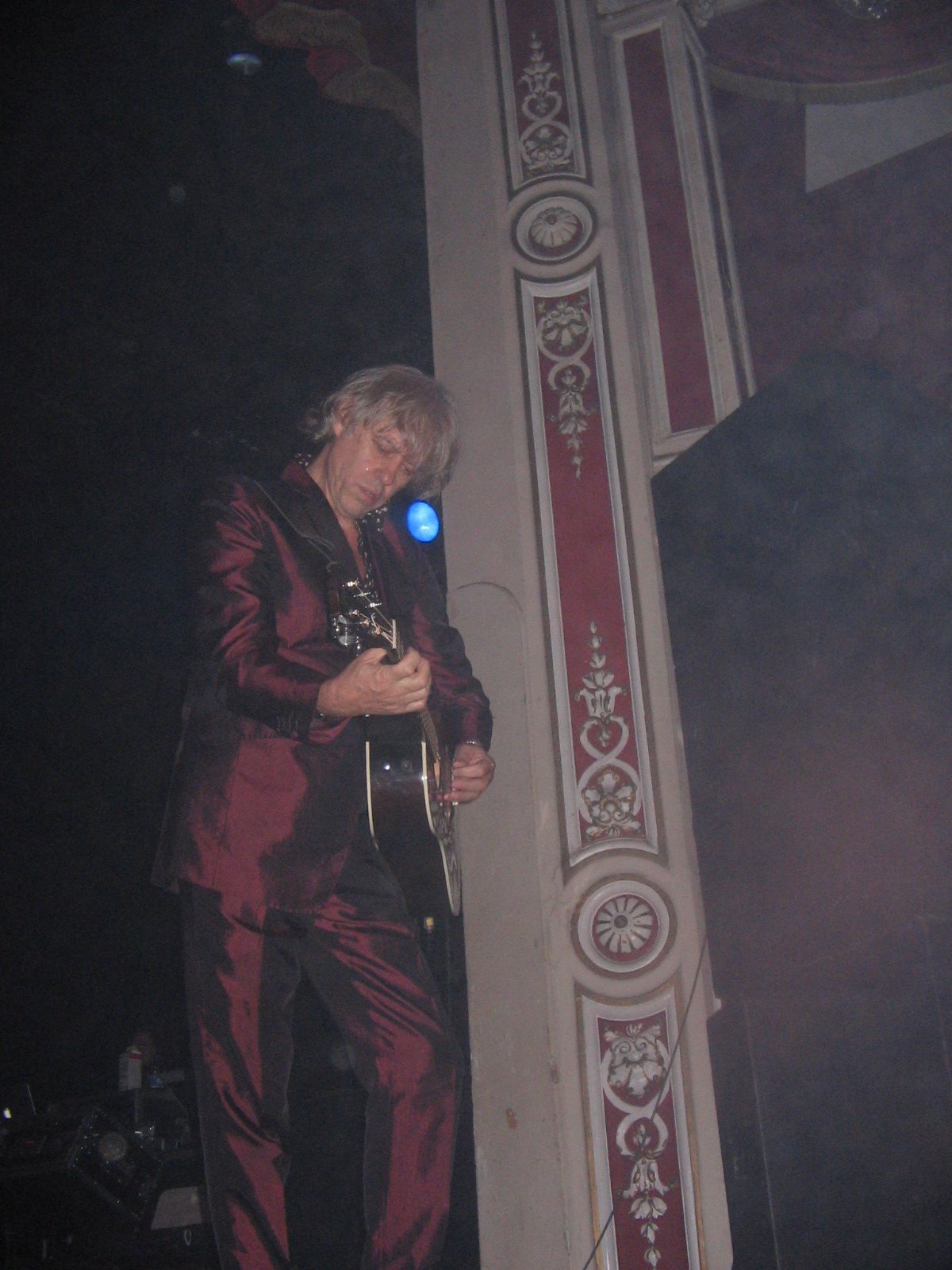 One Reply to “Sir Bob Geldof and Band in Lincoln”