As you know I’m currently listening to Dracula courtesy of Craftlit, so when the opportunity to visit Whitby came up last weekend, I was only too happy to take it.  I love Whitby anyway, it’s a pretty place with excellent fish and chips and some good pubs but the chance to walk the Dracula Trail and take the route that Mina and Lucy would have walked each day was just too tempting for a geek like me.  This blog post is mainly for the benefit of my Craftlit friends on Ravelry who do not live in England so won’t have the pleasure of visiting Whitby and seeing these sights for themselves.  I hope you all enjoy the Mina and Lucy experience!

We arrived on the Sunday lunchtime and it was very misty so my first photos were not very exciting I’m afraid.  Lots of white stuff with some shadowy blobs in the distance!   A walk around, a look in the gift shops and couple of pints of Theakston’s Old Peculier in the Duke of York pub and then it was back to the hotel for dinner.  We were staying in The Royal Hotel which is at the top of West Cliff by the Whalebone Arch.  The original Whalebone arch was erected in 1853 so I’m rather surprised it doesn’t get a mention in the book as the girls lodgings were very close to it.  This replacement was donated by Alaska in 2003 with a previous one donated by Norway in 1963 (what the hell do they keep doing to them?!)

As we set out in the dark, for an evening visiting the local hostelries, I couldn’t help but think of Mina, on that fateful night when discovering Lucy missing from their room, running through the deserted streets, over the bridge and up the 199 steps to the churchyard to rescue her friend.  Craftlit people, you will totally understand but for those of you who don’t, yes I do know it’s not real but  if you can’t use your imagination, there is little point in listening to a story and I really found myself imagining myself as Mina, running frantically all the way round from the West Cliff to get to Lucy up there on the East Cliff.  We had a most enjoyable evening in a few local pubs and then slept well with no nightmares or sleepwalking!

And so to Monday which was a little brighter.  After breakfast, we set out to find the Bram Stoker Memorial seat to start our walk.  We couldn’t find it and I’ve since discovered that we were looking in completely the wrong place!  However, from photos I’ve seen online, we didn’t miss much.  It is just a very ordinary bench but with a plaque saying that the view from there was what inspired Stoker to include Whitby in his book.  I did spot East Crescent which was originally called The Crescent and is where Mina and Lucy were lodging during their time in Whitby.  I couldn’t quite fit it all in, there were I think nine houses in total.

The first view we have is the one Mina had when searching for the sleepwalking Lucy.  Across from the West Cliff over to the churchyard and Abbey.   This is also the top of the steps that the girls would have walked down each day to go over to the East side.

Of course there wouldn’t have been a Patrick (who doesn’t normally look like a chipmunk, he’s pulling a strange face!) or a litter bin and benches in Mina’s day!

Down the steps and along past the Fishmarket to the Swing Bridge. 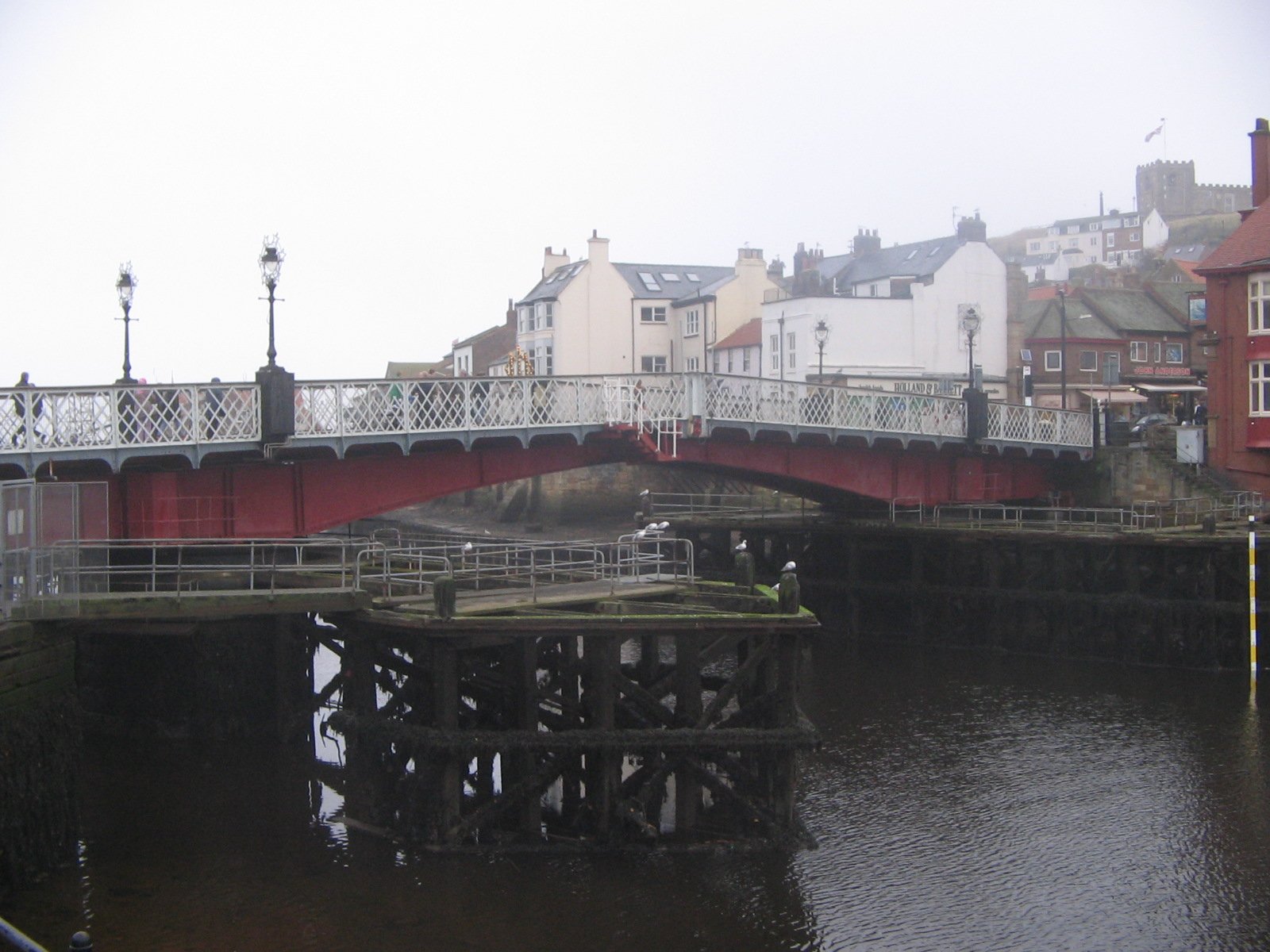 Then down Church Street toward the 199 steps up to the churchyard.  Before tackling the steps though, we went onto Tate Hill Pier and Tate Sands which unsurprisingly is the little beach area next to the pier!  This is where the Russian schooner Demeter, with Dracula on board, crashes into the pier in a storm having been driven through the entrance to the harbour.

Stoker based this storyline on a real-life incident involving the Russian schooner Demetius which had floundered off the coast of Whitby in 1885.  In the Dracula story, all the crew are missing and the captain is dead having tied himself to the wheel, when the ship crashes a huge black dog leaps from the bow and bounds up the steps to the churchyard.  Dracula had arrived in England!

The pier is the concrete structure at the bottom of the picture, just sticking out from beyond the second rooftop from the left and Tate sands lies to the right of it as you look at this picture.

Having looked around to make sure there were no large black dogs around, we took to the 199 steps.  That’s quite a long way up that our Mina ran you know! Here is the view from the very top of the steps.

Once at the top of the steps and when I could breathe again, we headed off to the churchyard.  There are several seats all around and for good reason, the views are stunning and I can really see why this spot was a particular favourite for our heroine and her friend.

We didn’t go into the church and unfortunately the Abbey site was closed because it is out of season so we couldn’t get up close and personal with the ruins which was a disappointment.  I took a few pictures of both though.

And of course, I was wearing my Wilhelmina Shawl and so had to have some modelled photos taken in the favourite spot of the heroine who inspired the pattern.  Please excuse the second photo…I appear to be in mid-blink!

After all that walking about I thought Patrick deserved a drink so we went back down to the Duke of York, situated at the bottom of the steps, for a well earned Old Peculier.  The site of the Duke of York has had an alehouse on it since the Doomsday book, I think it’s probably because the monks  needed a pint or two to help them up those steps!

We had a lovely weekend and Patrick was wonderfully patient with my current Dracula obsession, never once complaining about all the walking around and random photos.

For those of you who are not Craftlit people, I really cannot recommend this reading enough.  Heather has found some wonderful readers and each character has their own voice.  If you are not a crafty person and don’t want to listen to the knitting chat, Heather now has another site called Just the Books which, as it says is just the books with no craft talk beforehand.  Go on, listen to it, I dare you!