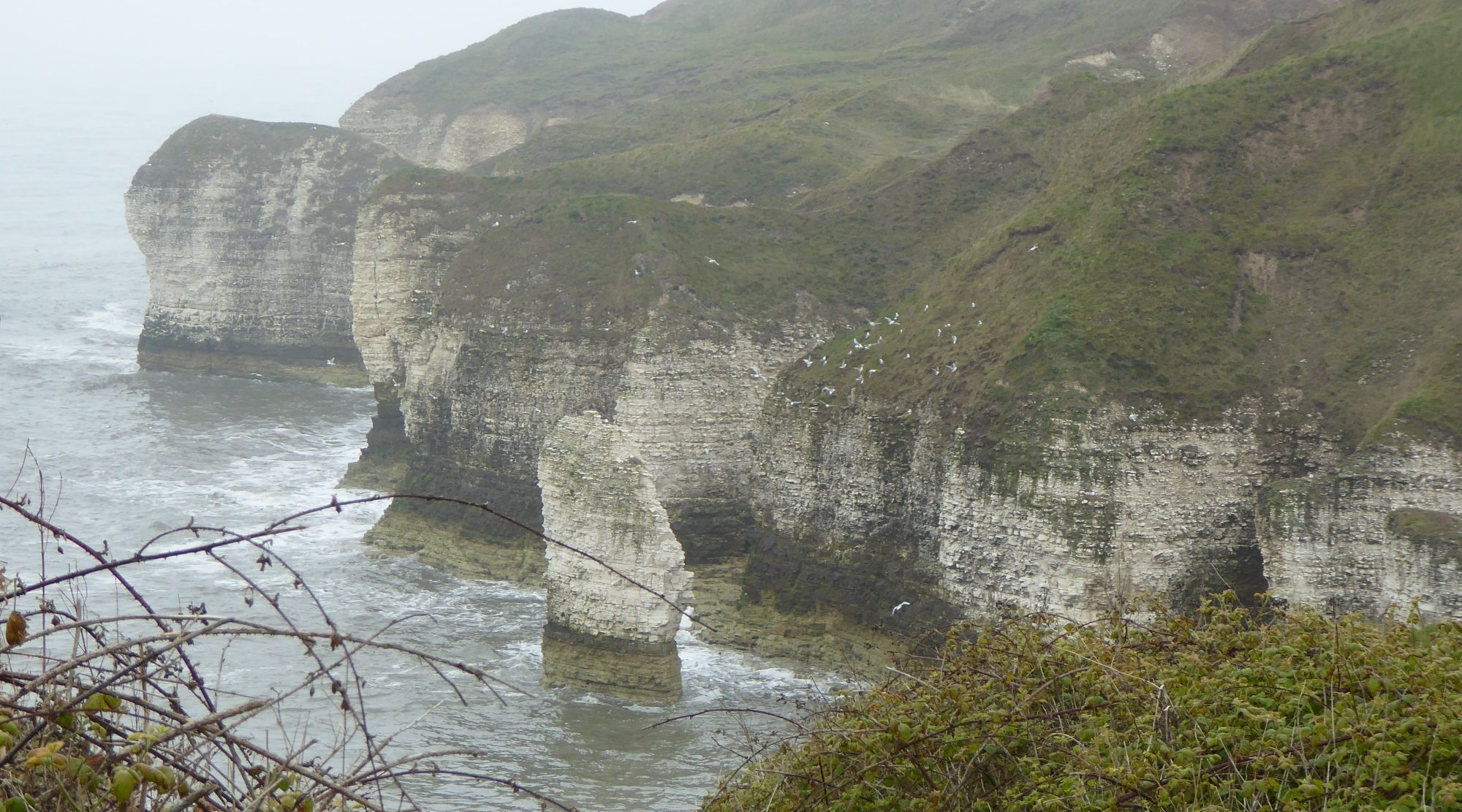 One of my favourite places in the world is Flamborough Head on our lovely East Coast and at only 35 miles away from home, it is an easy day trip. For the past three years though, we’ve had a few days stay in a static caravan during May or June, to coincide with the visit of the thousands of seabirds who flock to the cliffs for breeding season. This year, having had beautiful, sunny and warm weather for a few days, naturally the forecast turned to colder and wetter for our upcoming weekend! We weren’t about to let that spoil it for us though. Packing my little car with food, essential kitchen equipment and of course lots and lots of beer, you’d be forgiven for assuming we were venturing away from the civilised world for a month rather than three nights on a caravan site.

We arrived just before midday on Friday and after unpacking had a sandwich and a beer (what did you expect) and set off for a walk down to Thornwick Bay. The caravan is well situated for access to the many walks along the cliffs and its just a short walk through and down the cliff steps to the beach. The tide was rapidly coming in as was a light mist and it was chilly by the waters edge. I remarked that it was very quiet in terms of birds on these cliffs yet around the next point was crowded with the noise (and smell) of thousands, at that we both spotted what appeared to be a puffin in a crevice. Eagerly scanning the cliff face through the binoculars we saw that there were at least four nesting up there. I then saw one take flight and following it’s progress saw it land on the sea for a spot of fishing. We stood for almost an hour enjoying the sight of them back and forth between sea and nest. At one point we counted eight on the sea with three or four still on the cliff. They were of course joined by the ubiquitous guillemot, razorbill and kittiwakes.

We were feeling a bit chilly so headed back to the caravan for a lovely meal of fillet steak with a glass or two of our favourite red.

We awoke on Saturday to thick fog but it eventually cleared enough for us to venture out. We decided to walk through the village to the lighthouse and on the way, spotted the remains of Flamborough castle.  I think castle is a bit  too grand a description, it was more of a fortified manor house according to the history.  The ruins we see below are of the tower that would have been in the middle of it. 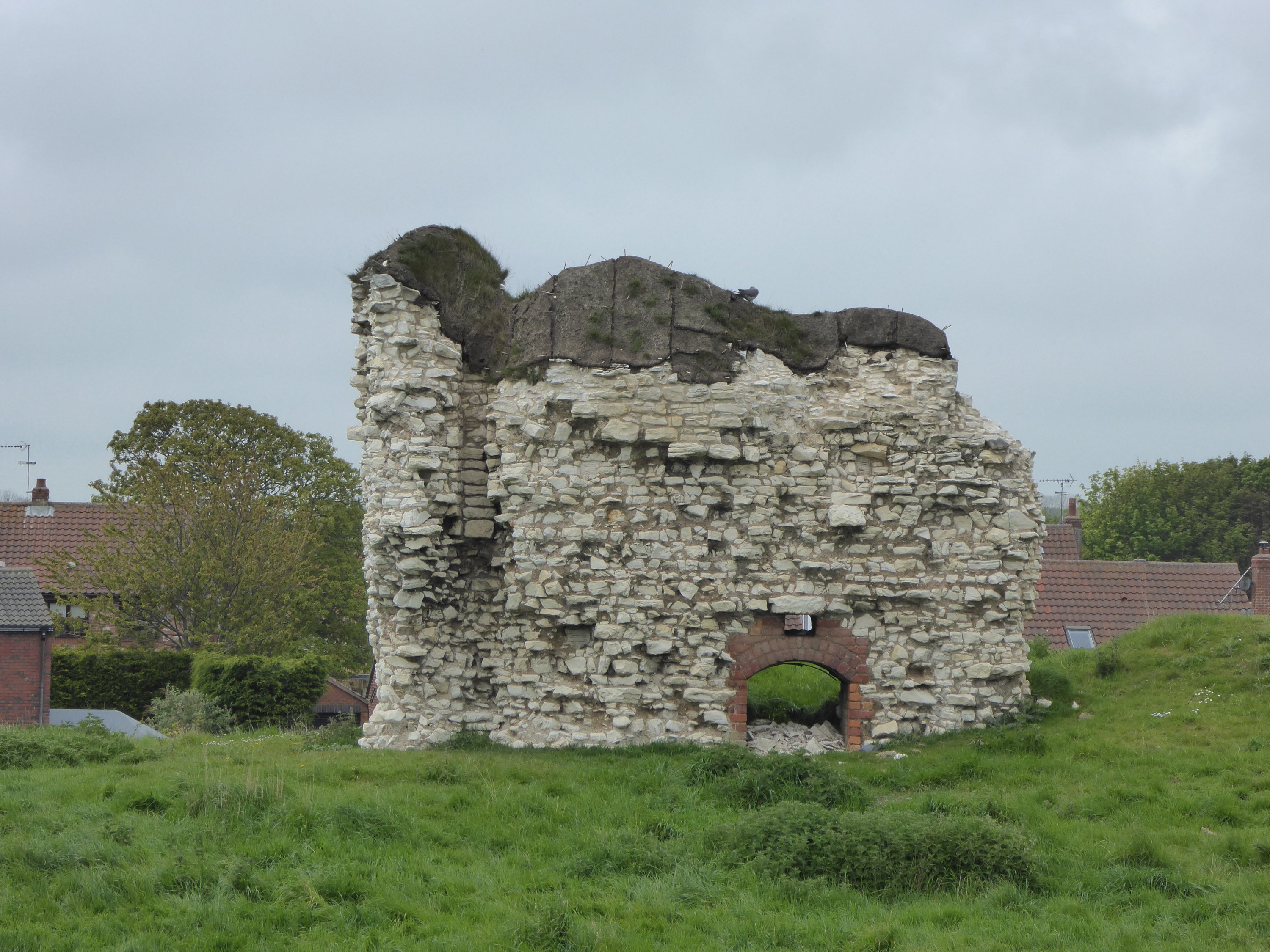 I must have seen this loads of times before but just not really noticed it. Its on private land so you can’t get close but there are information boards telling a bit of the history.

The rest of the walk seemed to take us forever due to Lighthouse Road being very long and boring! Although of course we did pass the old lighthouse which is always a good excuse for a photo stop. Built in 1674 but never used, it was replaced by the ‘new’ lighthouse in 1806.

I had wanted to do a tour of the new and working lighthouse but the fog would have made the climb to the top pointless as we wouldn’t have seen anything. I took a photo of it from the beach instead.

We enjoyed a light lunch of a home made fishcake in the cafe nearby and then climbed down the steps to Selwicks Bay.

We were lucky to see a seal playing in the sea, quite close to the shore. He knew lots of people were watching him and appeared to be showboating a bit but unfortunately I didn’t manage to get a photo as each time I pressed the shutter he dived and I missed him. After a little while we climbed back up and walked back to the site via the cliff top. We were lucky enough to still be able to see the fantastic flocks of birds despite the fog! Including a cormorant which we were pretty chuffed about.

We passed some impressive coastal architecture along the way too. 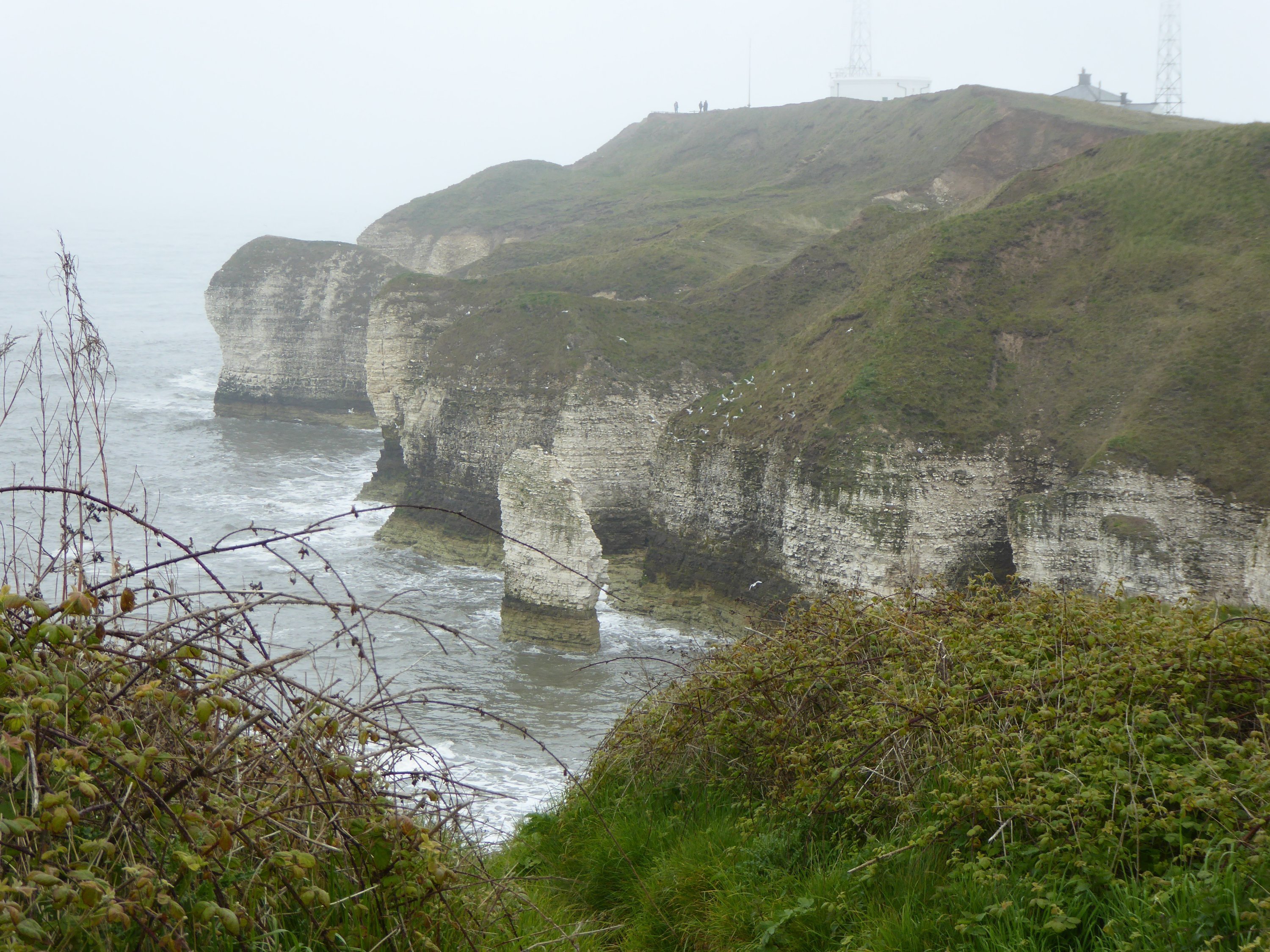 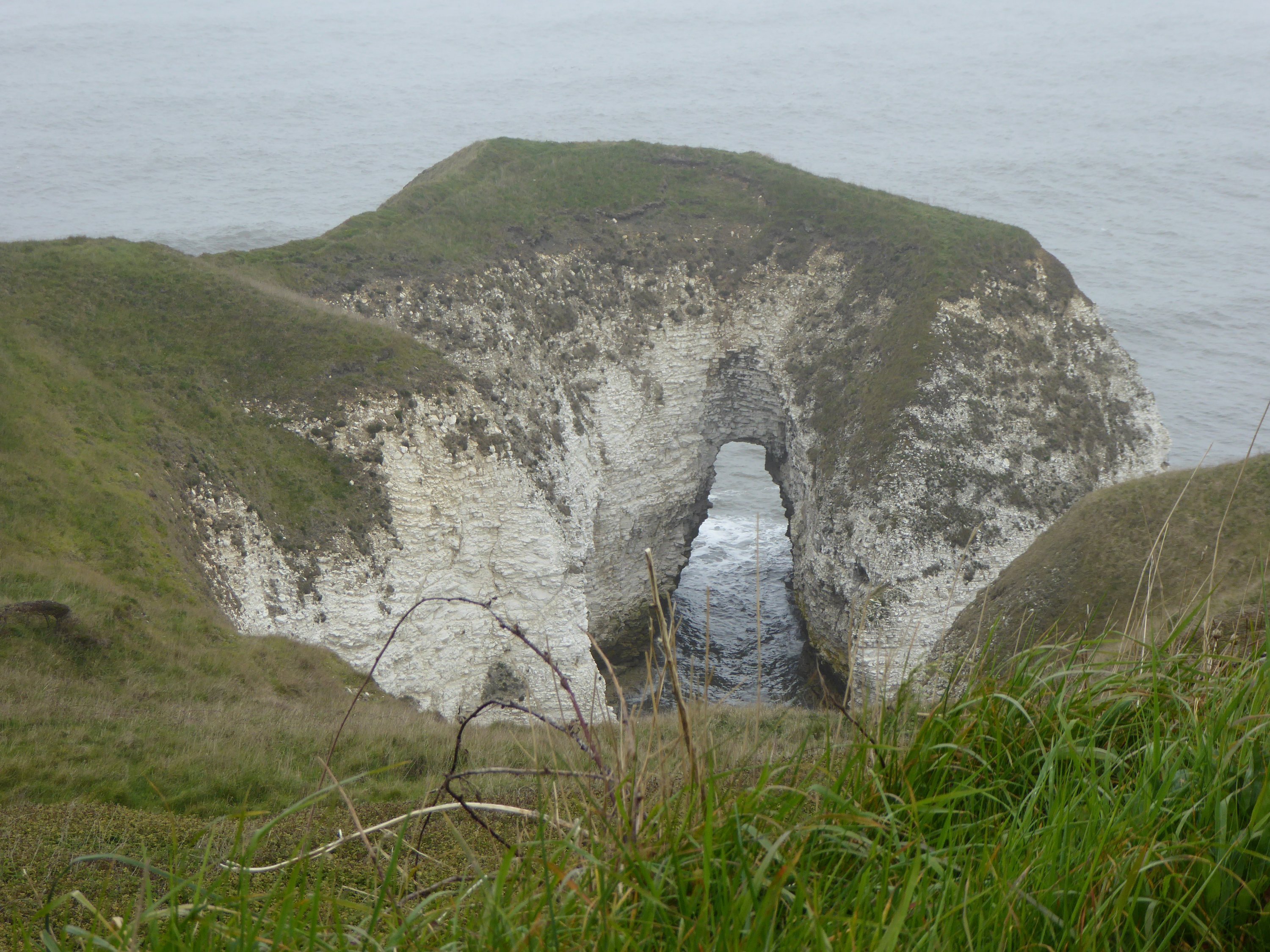 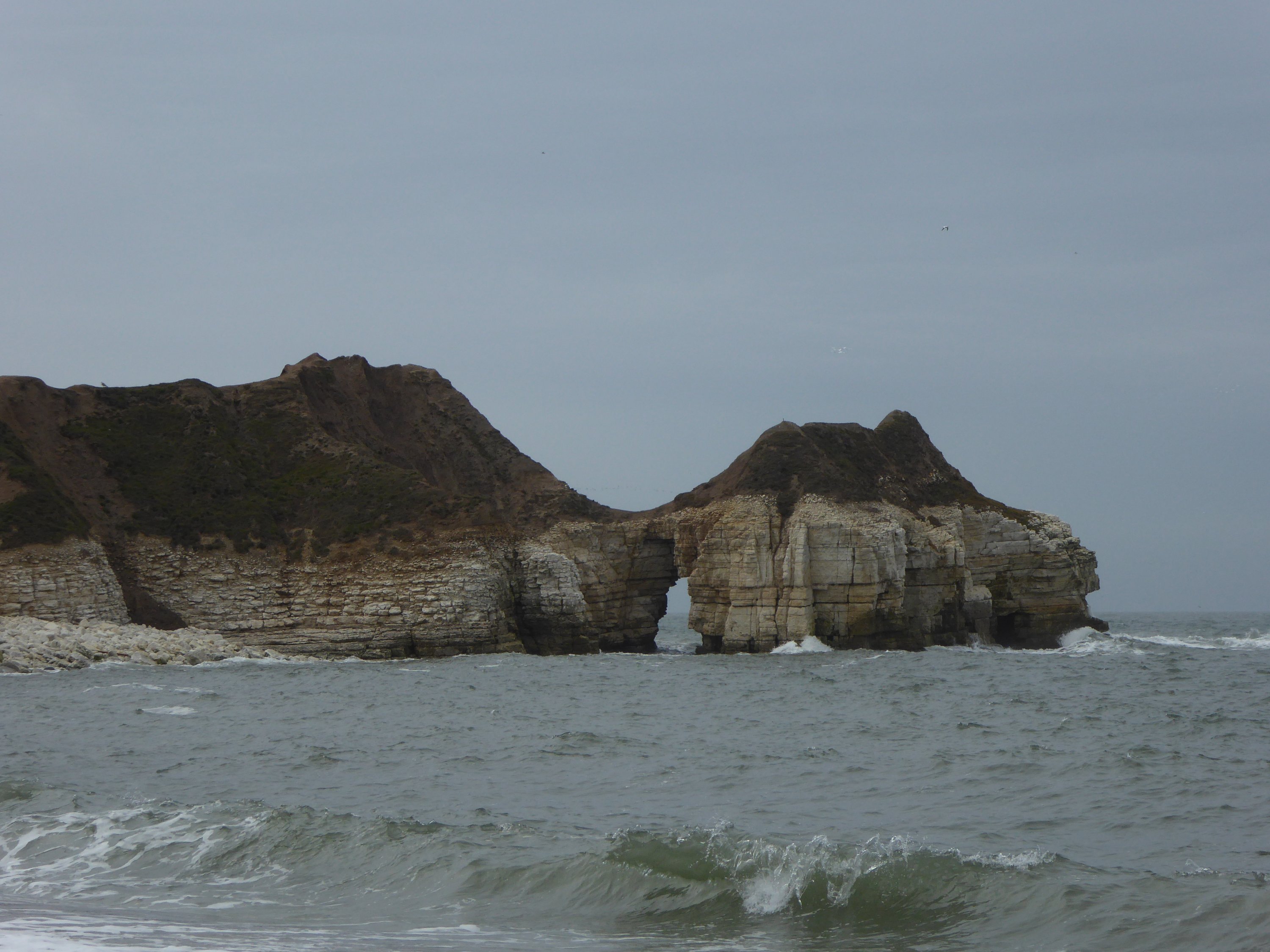 On Sunday we decided to go to Bempton. It was a lovely day so I was hoping for some good photo opportunities. On arrival, we were persuaded to join the RSPB but it is something I’ve considered in the past anyway so I wasn’t too difficult to persuade. We had a nice walk but I do find that Bempton gets too crowded at the viewing points. I prefer Flamborough Cliffs personally but Bempton is the place to see the gannets

Of course there are also puffins, this little guy or gal looks a bit fed up. 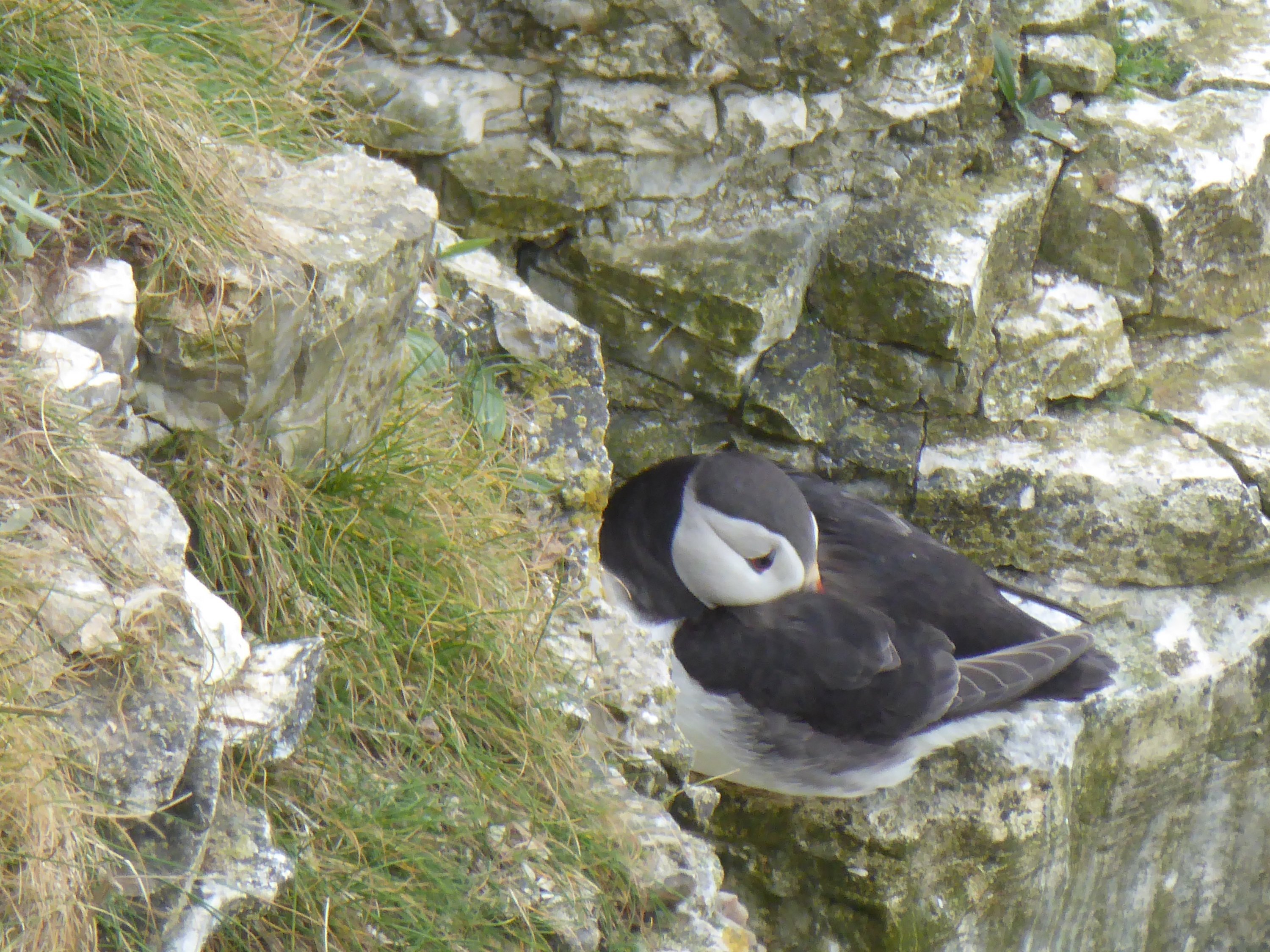 Razorbills.  You can tell them from the Guillemots by the shape of their beak which is more rounded on the top than the pointed beak of the guillemot.  Other to that, I can’t tell ’em apart! 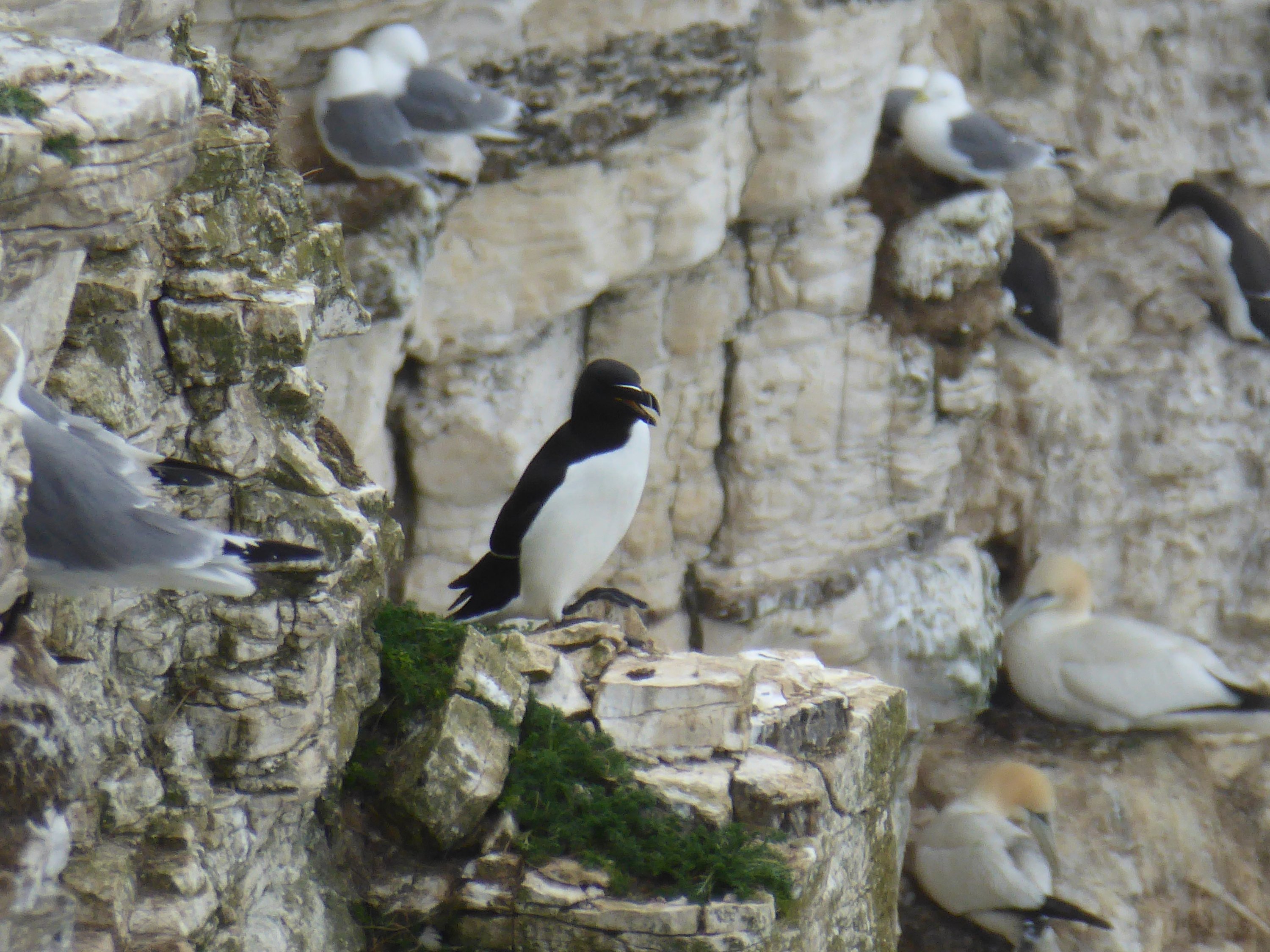 And guillemots, see the pointy beak. 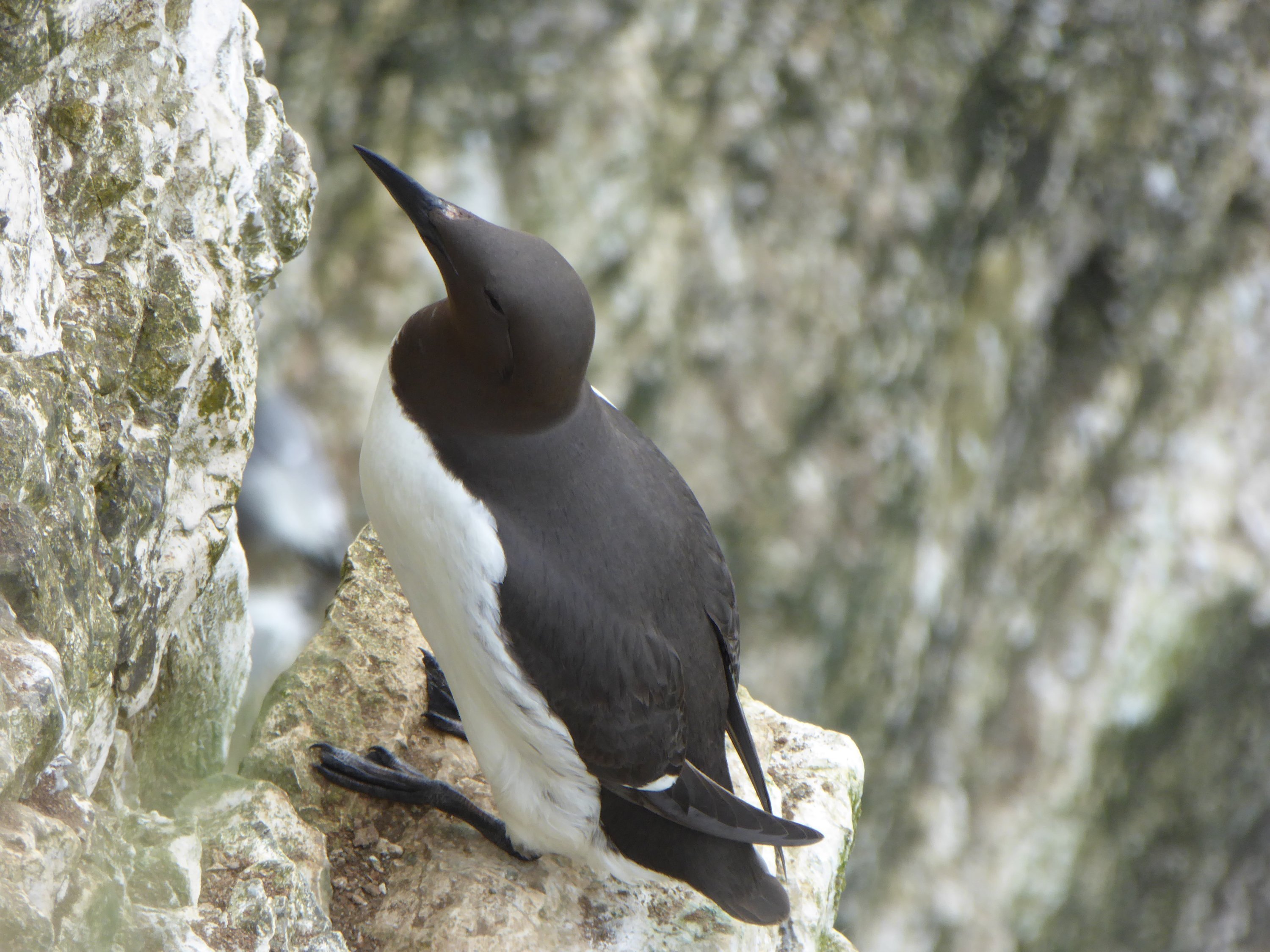 The sight, sound and smell of this amazing seabird colony is beyond imagination and if you’ve never visited, make the effort but make sure you have binoculars, you can hire them from the visitor centre.  I’m a bit disappointed with my photos this year but the weather was very foggy, especially on the Friday and Saturday and I think that makes the photos look a bit fuzzy.  Either that or I’m just a rubbish photographer!

All too soon Monday arrived and it was time to go home. We briefly stopped at Barmston en-route, just to see what’s there… Nothing much is the answer but the massive beach looked spectacular. As Patrick hadn’t been feeling well, we made tracks for home having had a great weekend.

I can’t wait to go back!