After a lovely drive up the coast, we arrived in Staithes just after 2pm. Cottage check in was 3pm but we chanced our arm and found it ready. After unloading our stuff, we had to move the car back to the top of the village to our pre-booked parking space as there is no public parking in the old village.

On first impression, Coble Cottage was charming and right on the harbour.

After parking the car, we walked down the very steep hill, through the high street back to the cottage to unpack and explore our home for the next 3 nights. It sleeps up to 8 in 4 bedrooms with 2 bathrooms over the two upper floors. A tiny but very well equipped kitchen and a lounge on the ground floor.

Having unpacked, we decided to pop to the shop for some butter, probably the only thing we didn’t bring with us. There doesn’t seem to be any general grocery shops in old Staithes and we didn’t really want to drive down to the next village to the co-op so we popped into a lovely shop called Betty Bo on the High Street. This was one of those shops that sells really nice but quite pricey artisan products. You know the sort of thing, hand made goats cheese and organic this, that and the other. It was nice though but the only butter they had was in a little wooden tub, raw butter which is apparently much better for you than Lurpak 🙄. It was a case of being more convenient than having to shift the car and drive to the co-op so we bought it at just short of a fiver! It is bloody nice though I have to admit.

Coming out of the shop, we decided to do a bit of exploring so went down a little snicket next to the Cobbles cafe which took us to a bridge over the beck.

We turned towards the sea, past a row of cottages, the life boat station and some lobster pots to the harbour wall for the obligatory walk to the end. 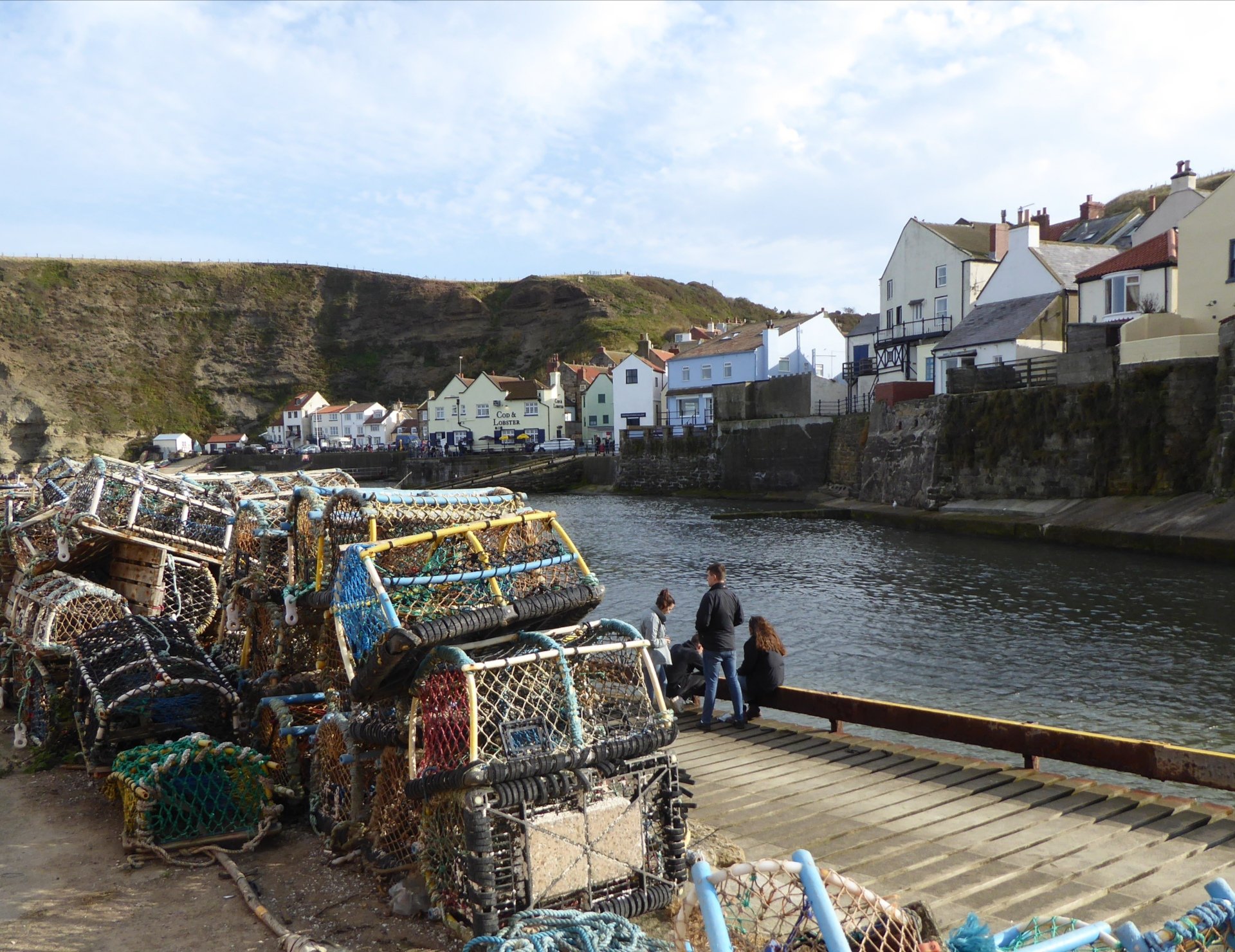 It’s a pretty view from the harbour wall looking across towards the bay and we could see our cottage tucked in between the rest. 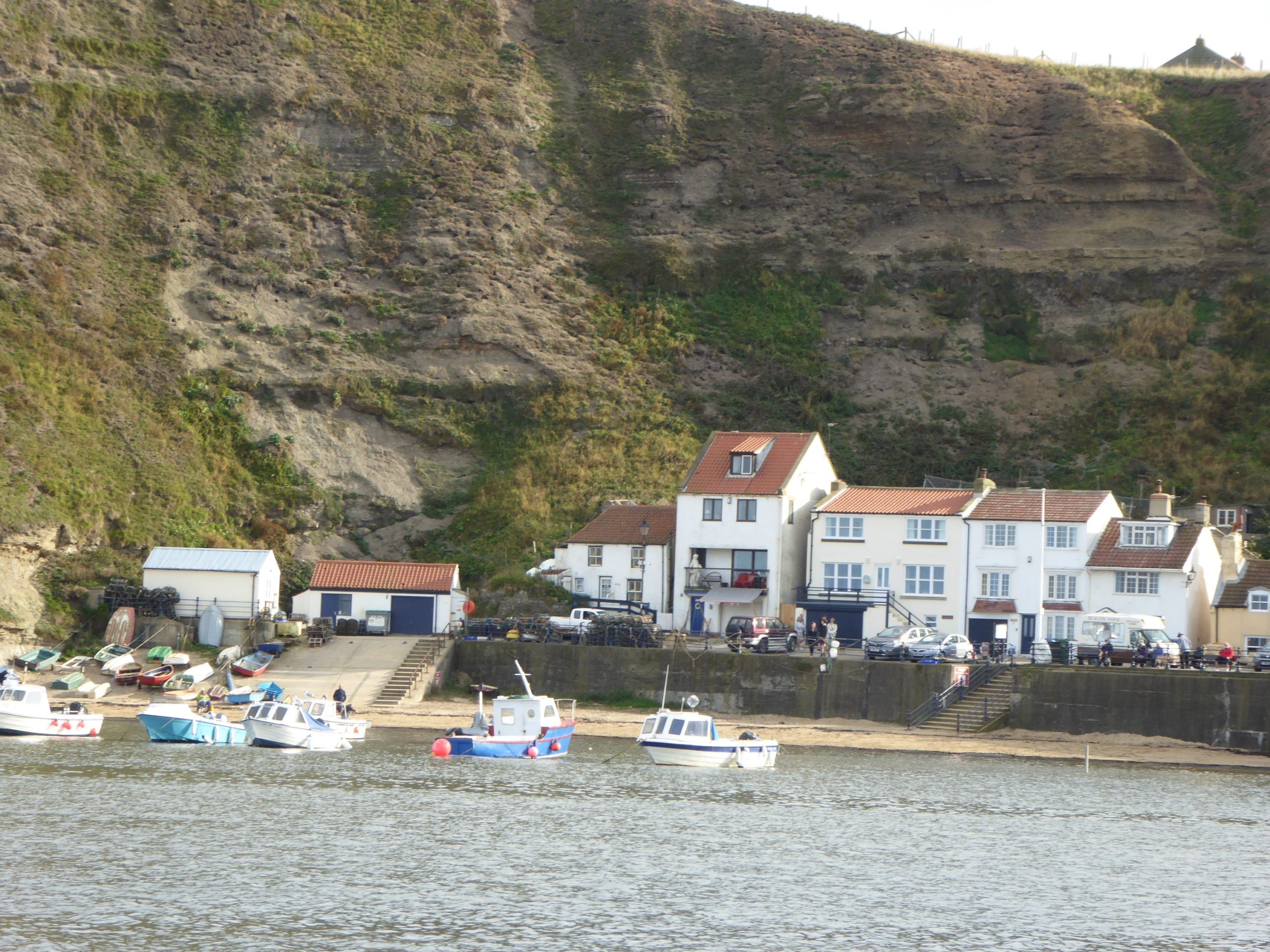 On our way back and instead of crossing the bridge back to the High Street we continued up a very steep hill, just to see what was there really.

I’m
We didn’t realise that we were walking up the side of Cowbar Nab until we got to the top and there was a sign and a stile to climb over to continue to the top of the headland.

Well, we were already there so decided to carry on. Over the stile and through some undergrowth and a few hundred yards later we were on the top of the world! Next three photos are taken from the top of Cowbar Nab. 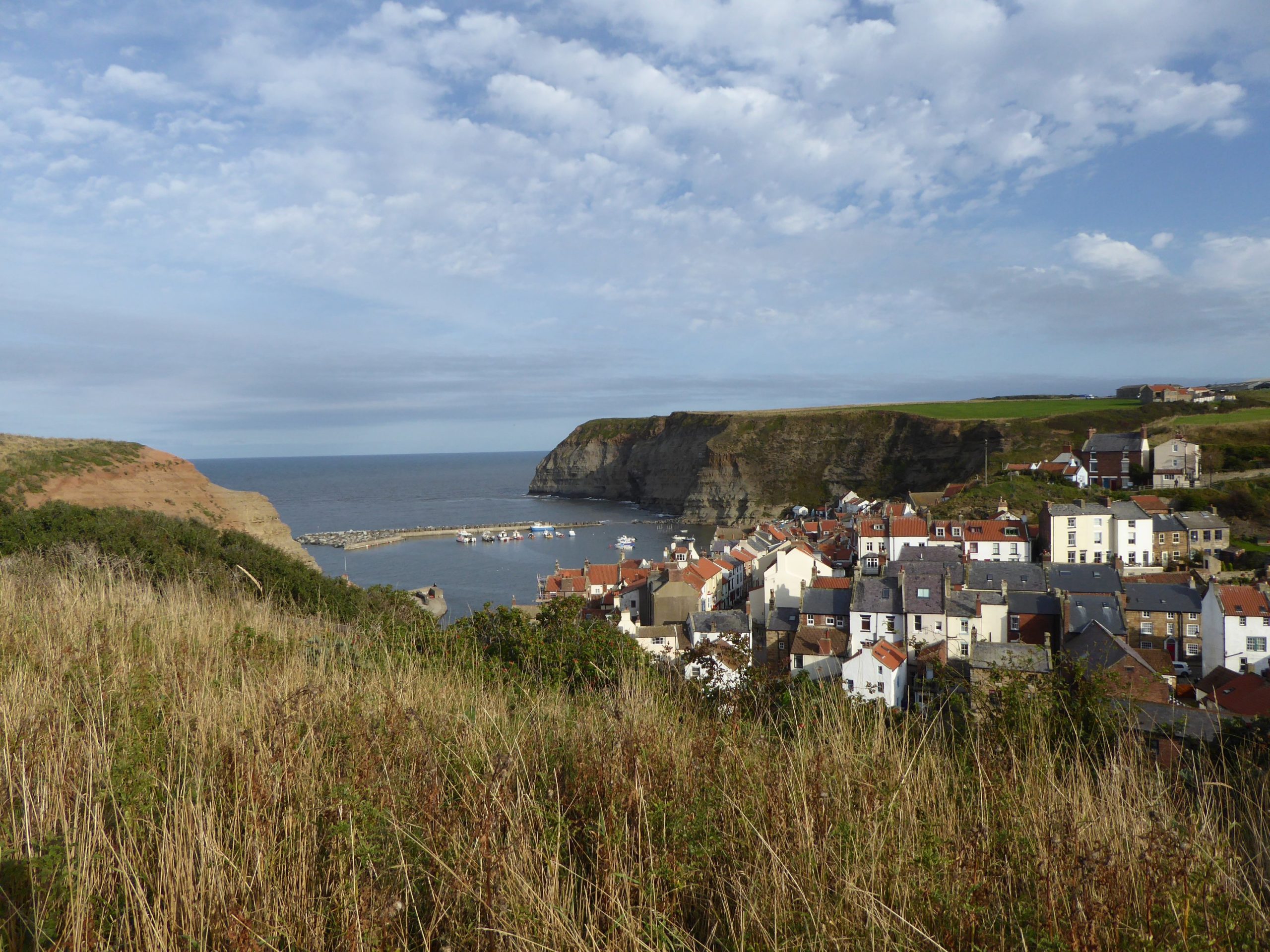 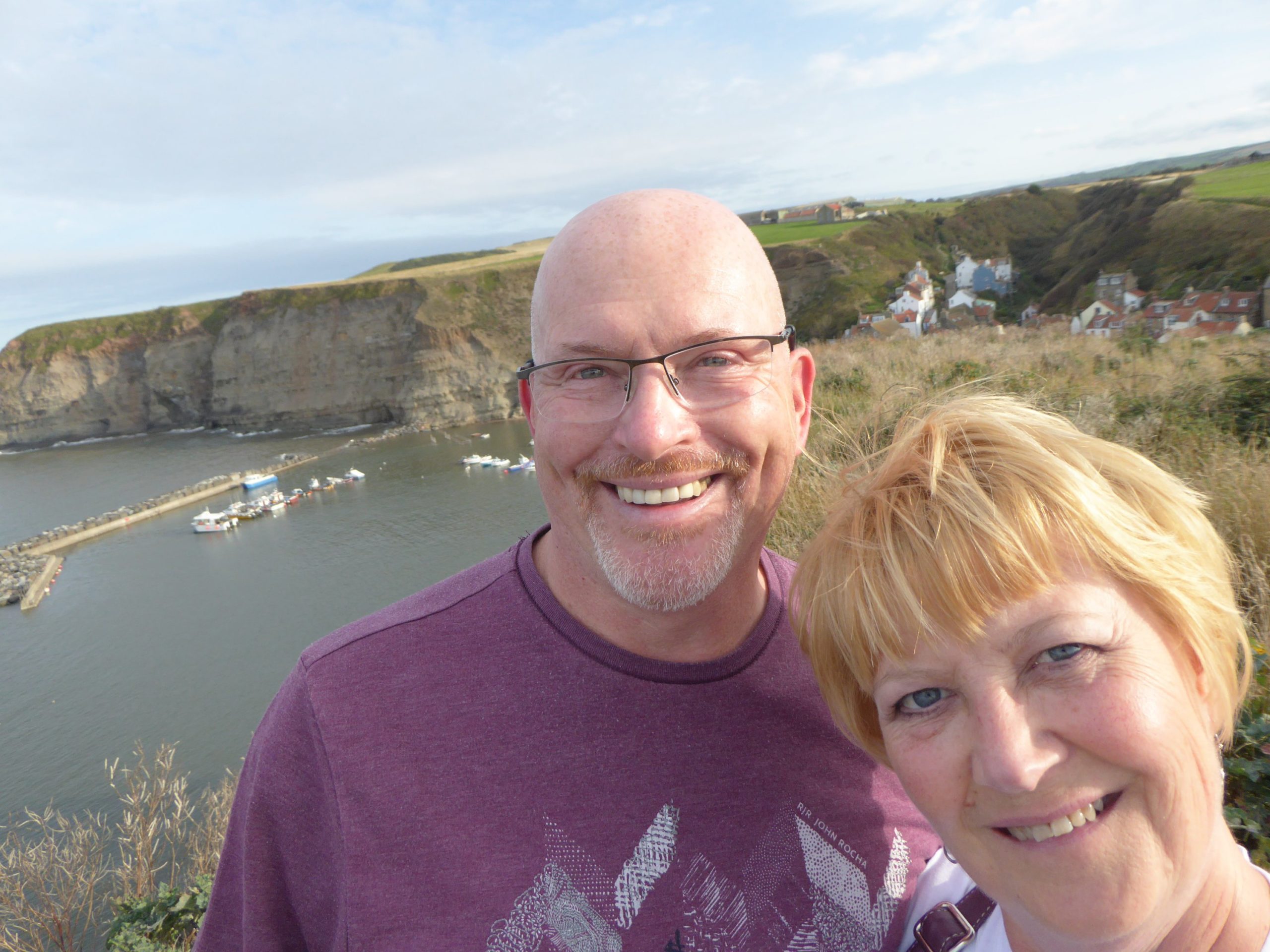 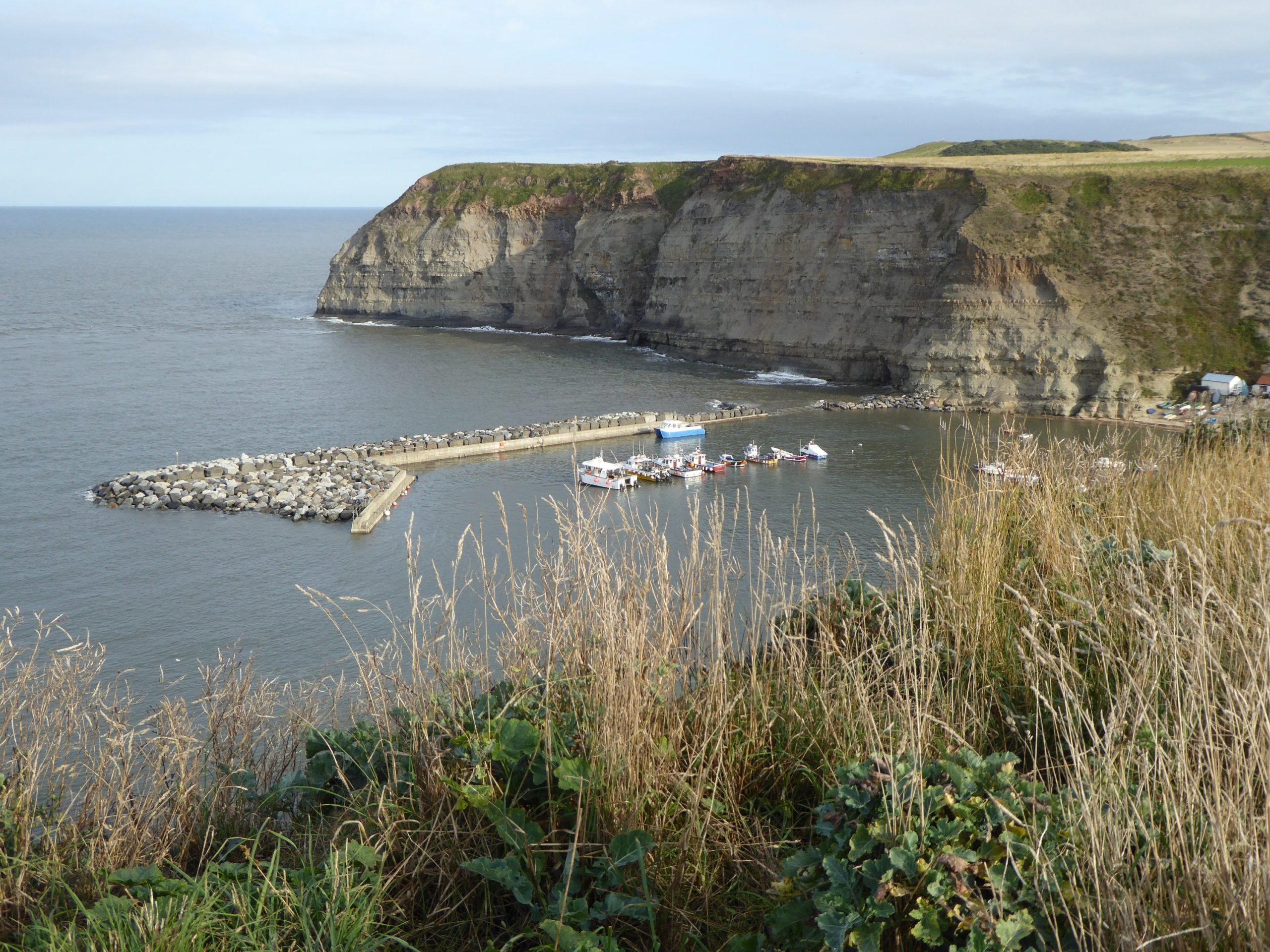 Back down the hill and on the way to the cottage, we’d hoped to pop into the Cod and Lobster but it was too busy and we couldn’t get in. Resourceful as ever, we got ourselves a beer from our own supply in the cottage and went and sat on a bench on the harbour just yards away from the front door.

What a lovely first day.