I mentioned last week that I was test knitting a hat design for Knitting Kninja, well I finished it and my son immediately claimed it, declaring it to be the most comfy hat he’s ever worn.  Here it is

I love how it turned out and he is right, it is such a comfy cosy hat.  I had sort of promised it to Patrick but Mason got in there first so I’ve had to knit another one for Patrick.  I’m not complaining because it is a nice hat to knit and very quick too.  I knit the second one in the same yarn but in a lovely shade of brown, kind of reddish brown almost and Patrick is very happy with it.

I also finished one of the baby hats I’m knitting for my work colleague.  I converted the hat pattern to knit in the round on magic loop because it was written to be knitted flat and seamed.  The seam would have been up the back of the hat and I really didn’t want to think of a tiny baby having to lie on a seam, it might be uncomfortable and they can’t tell you what’s hurting, only cry.

Now, I have cast on for another shawl, I probably shouldn’t because I have lots of things I need to get done but hey, it’s my hobby and I’ll do with it what I want!  I decided to go for it because a group I am part of on Ravelry is having a KAL (knit-along for the uninitiated).  The group is called What Would Madame Defarge Knit, named for the book that it is centered around.  WWMDfK is a great knitting book, first thought up by podcaster Heather Ordover of Craftlit.  It features over 20 knitting and crochet patterned inspired by classic characters in literature.  The shawl we are knitting at the moment is called Wilhelmina’s Shawl and is named for the heroine of the book Dracula.  We are currently listening to Dracula over on Craftlit so this is fun to do. I’m using some Aruacania Ranco Multy in an orange/purple colourway and it’s looking good so far.  I’m only going to knit on this for the hour a week I listen to the podcast though because I do have other things I want to get on with.

If you fancy listening along to Dracula, I really recommend it!  It is such a cool and creepy book, none of your Twilight rubbish here.  Just click DRACULA.

UPDATE:  previous link didn’t actually link to the Dracula post on the Craftlit blog, I’ve fixed it now! (note to self; check  links before publishing posts ;-))

My little back-yard garden is coming along nicely, considering that I really don’t give it the attention it should have.  I do water it most days but haven’t been overly active on the feeding side of things.  I should really because my tomatoes and cucumbers are abundant with fruit just waiting to ripen.

Whilst they were still very small, I thought they were not going to survive so I planted a second crop as back up, some trailing cherry tomatoes to put into nice pots.  Now they are growing too and I’m not sure what to do with them!  I have put one of them in a tall pot with some mini surfinas and a basil variety called Minissimo with tiny leaves to keep them company

and I have another two that are still languising in their little nursery pots as well as a cucumber.  I’ll ask Patrick, if he wants them as I don’t know whatever I will do with all these tomatoes if these ones crop as well as the Latah.  Mind you, as they’re not yet even flowering, whether they will fruit whilst the summer is still here to ripen them is unknown to me, being inexperienced in tomato growing as I am.  I also have some Pepper plants which are flowering and one or two of them have tiny fruit on, it’s very late in the year now though so I’m not overly hopeful about the success of these.  I must be earlier with my planting next year!

Finally, I have carrots, radishes and salad leaves, the radishes and carrots haven’t come to much yet but the salad leaves are fine, pity they’ll probably all be gone to seed by the time the tomatoes and cucumbers are ripe! 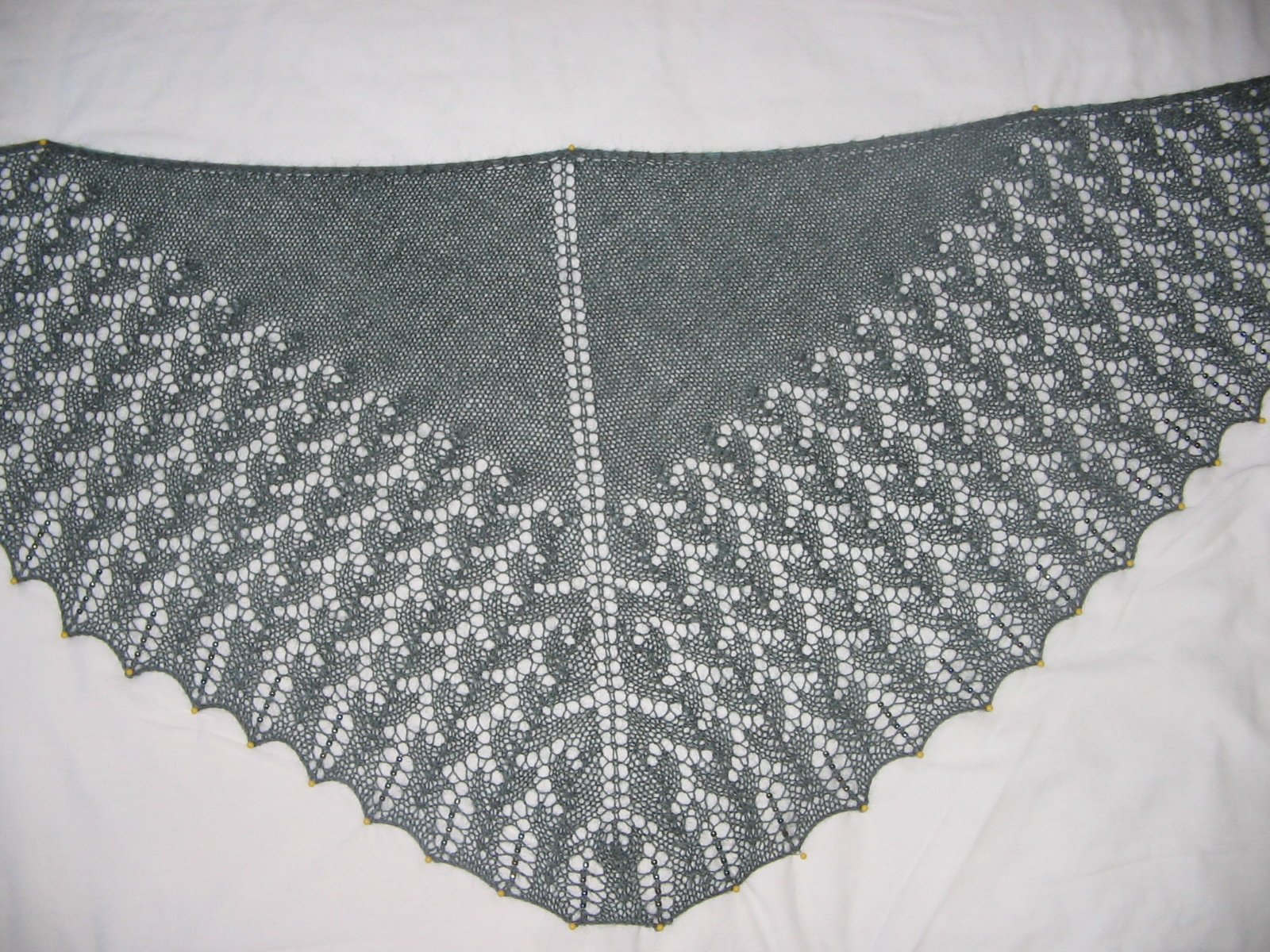 On the knitting front, I finished the Ishbel for Patrick’s sister Coral a few weeks ago and she was very pleased with it.  Here it is blocking. I really enjoyed knitting this and I’m sure I will knit it again and again.

I decided to bead the last section to add a bit of interest.  I was particularly pleased with how it turned out as it was my first attempt at knitting with beads.  I knitted a little sample of the edge chart to practice with and also to decide which of the 4 different beads I had bought (because I couldn’t make up my mind!) to use.  In the end I went for some dark green iridescent ones that I thought looked really effective against the pine green yarn.  The yarn I used was Cygnet Wool Rich 4ply in colour Pinemix.  Below is the beaded edge detail, the yellow things are pins not beads!

I am almost finished with my Traveling Woman Shawl http://feministy.com/patterns/traveling-woman/ and am now on the last section and adding beads for a bit of bling.  I’m pleased with this and have enjoyed it more as I’ve gone along.  At first, I wasn’t getting on with the lace pattern, although I have to say it is incredibly easy to remember, I just seemed to have a mental block and kept having to count all the time.  It just clicked after the first repeat of the chart and I got along with it fine after then.  I really wanted to have it finished in time for the weekend because we are going away but I don’t think I can have it finished and blocked in time.  I am also STILL doing the boyfriend’s Hug Sweater!  Mind you, if I actually did some work on it instead of just saying I am still working on it, it might get done a bit faster!!  I can’t say that I’m hating doing it, I’m not, it’s just a bit tedious and there are so many other nice things I want to knit.  I know I will be thrilled once it’s done and I can present it to P, I thought of knitting him a sweater because I wanted to give him a gift that I had spent time making….and believe me, I have certainly spent a lot of time with this one!  Once I finish my shawl though I think I will concentrate on getting it finished.  P just cannot comprehend the constant flitting from one project to another but I know that all you knitters out there will understand perfectly 🙂