How time flies!  I really did intend on making sure I had a new post out each week so I can’t believe that two weeks have gone by since my last post. 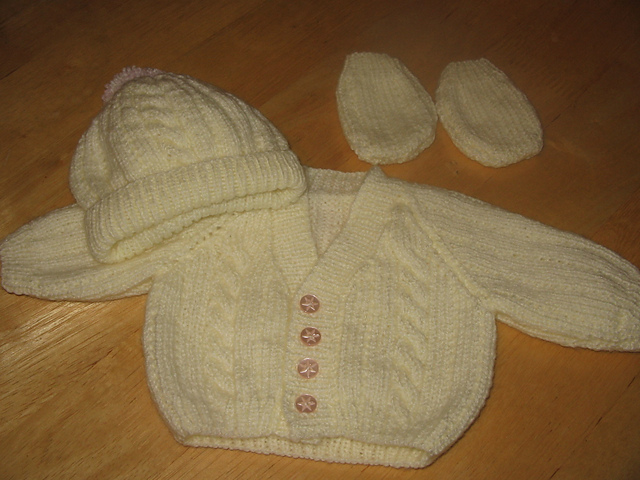 Firstly the brilliant news for this post is that my work colleague took her triplets home from the hospital last Friday.  Here are the little teensy matinee sets that I had knitted, I was chuffed to bits to discover that she had used them for the babies’ coming home outfits and they had been much admired.  I made two sets with pink buttons and pink pompoms for the hats and one set with blue.  The pattern was one from a Sirdar book for newborns and premature babies, called Sirdar 280, Early Arrivals Booklet if anyone is interested.  I was going to put a link to the article in our local newspaper about their homecoming but it appears to have been taken down already!

In other knitting activity, I’ve also knitted a baby jacket for another work colleague’s new grandson and also a hat for his big brother so he didn’t feel left out.  The jacket was a free one on Ravelry, Baby Roots Cardigan  (Rav Link) and I really enjoyed knitting it.  It was knitted top-down in one piece which is my favourite construction for cardigans.  I used some stash yarn which was Rico Aran Duo in a cream mix colour and it turned out really well.

The hat was Bubbles by Woolly Wormhead and I knitted the flat top version which I think is so cute.  I usually love Woolly’s patterns and this was as well written and clear as ever but it had far too much purling in the round for my liking and I don’t think it’s one I’ll knit again in a hurry.  It turned out lovely though and I’m looking forward to seeing Ethan wearing it.  The yarn was some stash yarn that has long since lost it’s ball band but I seem to remember it being Stylecraft Aran with Wool.

I’ve also started Tappan Zee for myself.  I’ve liked this pattern ever since I first saw it in Knitty’s Spring/Summer 2010 edition, but as usual it got lost in the queue.  However, after knitting my Meret in the lovely Soffia Plus, the rest of it in my stash started shouting Tappan Zee, Tappan Zee everytime I walked past the shelves where I keep my yarn stash so I had to cave in and cast it on.  It’s another top-down seamless jobby so I’m a happy bunny knitting along.  I’m pleased with the look of it so far, I just hope I have enough yarn…I’d hate to hate to frog my Meret to finish it!

Last weekend, Patrick and I went to Manchester to the National Winter Ales Festival.  We set off in the chucking rain, the M62 is most unpleasant to drive down in that kind of weather I must say.  We arrived in the chucking rain and it was still chucking with rain when we left the Premier Inn on Saturday morning.  However, we didn’t go to sunbathe, we went to drink lots of lovely dark winter ales.  Mission was accomplished most satisfactorily.  As usual we met some nice people and had a giggle with them.  One group of lads had brought along their lager drinking friend to try and convert him and he wasn’t much impressed.  However as an ex-lager drinker myself I understand that it does take a while for your palette to adjust to drinking alcohol that actually tastes of something rather than just being wet and fizzy.  On reflection though, dark and flavourful winter ales probably are not the best introduction to a real ale drinking career!  He would be better at a summer ales festival I’m sure but I doubt he’ll give it another chance.  He did make a very valid point though and one which I have often made myself.  Where the hell do some of these people hide when they are not stalking around beer festivals?  Seriously there are some people who at best could be described as “characters” but really are just a little bit weird.  There are the usual anorak, back-pack carrying oddities but also some very strange looking people, like the little guy with the leather trousers, leather waistcoat, leather cowboy hat and aviator sunglasses…indoors…in Manchester.  He would look ok cruising Route 66 on his chopper maybe.  I really wanted to try to take some surreptitious photos of some of the “characters” but it would have been too obvious.  Although lager boy did grab Mr Leather & Sunglasses and insist on having a photo taken with him, I should have taken one too.

One Reply to “Time Flies”